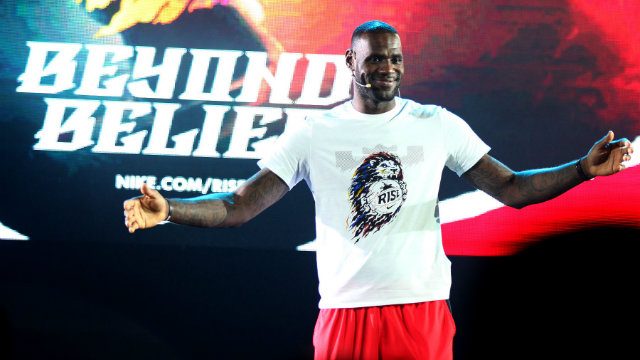 MANILA, Philippines – LeBron James is back in the Philippines for his second visit, and over the next few days, he’s making it a point to inspire Filipinos aspiring to succeed in the sport of basketball through his leadership, experience, and knowledge of the game.

“It’s great. Like I said before, ‘I’m coming back,’ and I couldn’t wait to come back here, man,” James, a 4-time NBA MVP and popularly regarded as the best basketball player in the world, told the media during a press conference on Thursday, August 20, at the Nike House of Rise.

“It’s been great,” he added. “You guys welcomed me and my guys and my friends with open arms, so it’s always a pleasure.”

James, who first came to the Philippines in 2013, is also here as part of the Nike Rise program – a reality basketball TV documentary started by the global footwear brand to discover untapped talents of the game around the country.

James is scheduled to play in an exhibition game at the Mall of Asia Arena with some of the Nike Rise PH kids on Thursday evening.

“I think more than teaching them skill sets, I think it’s about the inspiration that comes behind it,” said James. “The stories that I can give them, tell them about the game. Then it’s up to them to use that, the words that I give them. Use them to better themselves. I think that’s more important than anything.”More than getting to tell stories about how they were on the same court as LeBron James – a two-time NBA champion and Finals MVP – the Nike Rise kids will also get a first-hand lesson on two important factors of basketball from a certified future Hall of Famer.

James also hopes that he can share with a lot of other basketball hopefuls are the traits needed to be a leader – something that’s much easier said than done due to the various ways it has to be exhibited.

“I’ve evolved over the years and the best part about it is I’ve had guys who want to listen, want to learn,” said James, who in his NBA career has played with notable players like Dwyane Wade, Chris Bosh, Kyrie Irving, Kevin Love, and more. “When you have that, you’re able to understand how you want to lead certain guys.”

James, who entered the NBA at the age of 18 and is now 30 years old, is the go-to leader of the Cleveland Cavaliers, who lost in this year’s NBA Finals to the Golden State Warriors. The 12-year-pro says that becoming the leader he is today took a long time to “master.”

“Everyone can’t be led the same way,” said James, who was interviewed on stage by Boom Gonzales and spoke for about 7 minutes. “You gotta be able to talk to guys in certain ways. I’ve learned over the years how to master it and I hope to continue to learn from it every day.”

“I think it’s by example and it’s by command as well. I don’t think you can teach leadership. You either want it or have it, or it’s not there. I think it’s a trait that I’ve always had.”