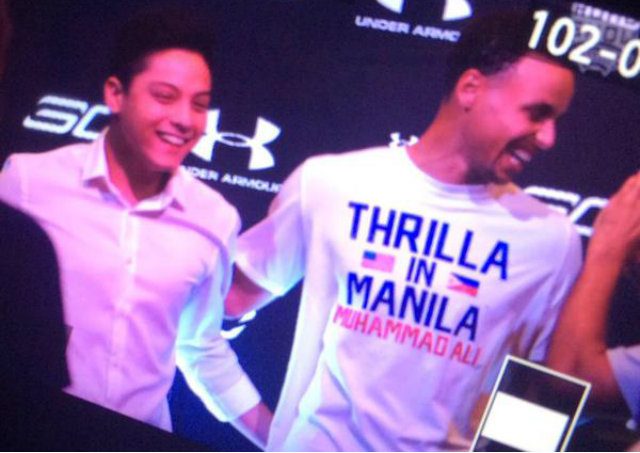 Facebook Twitter Copy URL
Copied
The "She's Dating the Gangster" star meets his NBA hero, who is in town for a day to promote Under Armour

MANILA, Philippines – Daniel Padilla may be one of many Filipinos who eagerly anticipated the arrival of NBA MVP Steph Curry in Manila, but there probably aren’t too many people who are more excited to meet him.

The teeny-bopper actor, who was drafted by the AMA Titans in the Philippine Basketball Association D-League last year but declined the spot, got a chance to meet the Golden State Warriors star on Saturday, September 5 at Raffles Makati.

The “She’s Dating the Gangster” star was all smiles as he posed for photos with Curry, who is in Manila for a one-night-only engagement before shipping out to China tomorrow as part of Under Armour’s “UA Roadshow featuring Steph Curry.”

I CANNOT BELIEVE THIS.. @StephenCurry30 Thank you..  #GodisGood pic.twitter.com/LrV0GlSP3q

Padilla tweeted afterwards, “I CANNOT BELIEVE THIS,” and apparently neither could his fans on social media as #DJPMeetsStephCurry trended worldwide on Twitter.

Curry, 27, averaged 23.8 points, 7.7 assists, and 4.3 rebounds a game last NBA season, leading the Warriors to a 67-15 record in the regular season and their first NBA title in 40 years after defeating the Cleveland Cavaliers.

Curry is expected to take part in an exhibition later today at Mall of Asia Arena. Fans lined up at Under Armour locations last week for a one-day purchase promo that offered two tickets to the event in exchange for 5K purchases from the sports apparel merchant.

This is Curry’s second stop on the Asia tour, having visited Tokyo yesterday. He’ll head to China on Sunday, September 6 for a stop in Beijing, followed by Chongqing and Shanghai in successive days. – Rappler.com