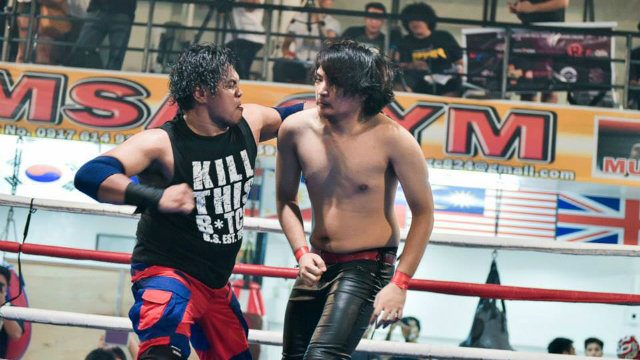 MANILA, Philippines – There’s a reason why pro wrestling programs are prefaced with the warning: Do not try this at home.

While the action in the ring at pro wrestling organizations may be coordinated, the performers are constantly pushing the limits of their bodies, and at times, good taste.

At Philippine Wrestling Revolution’s “Renaissance” event on Saturday, September 26, fans witnessed one of the most extreme wrestling spectacles in the country’s history.

The match between Bombay Suarez and John Sebastian took the no-holds-barred stipulation of their match to heart as they beat each other around the ring. And when the ring wasn’t sufficient enough to contain the action, they took the show around the ringside area and the catwalk overlooking the crowd.

The most shocking moment of the match came when Suarez, a crowd favorite with a reputation for hardcore wrestling, lifted Sebastian’s shirt over his head in the corner. He then proceeded to douse his hand in rubbing alcohol, light it on fire and then smack Sebastian across the chest.

“In wrestling that may have been the craziest thing I have ever done,” admits Suarez. “I wanted to hurt John Sebastian so bad I didn’t care if I put myself in harm’s way or hurt myself as long as I hurt him more.”

The crowd seemed to appreciate the sight as they chanted “Holy shit!” vociferously as Suarez repeated the maneuver.

“Some people like watching shit burn. Then there’s the people who just want to burn shit, and I’m one of them,” said Suarez.

.@bombay_suarez also did a running clothesline with his arm on fire at @pwrofficial Renaissance pic.twitter.com/QMIm3noc0b

Suarez ultimately lost the match after being slammed onto a (real) steel chair by another performer, Main Maxx, before being pinned for the 3 count.

(WATCH: A prologue to the Philippine Wrestling Revolution)

The former movie theater turned boxing gym was filled to near capacity as an estimated 600 people witnessed the sixth live event of the country’s only pro wrestling organization. In the main event, “Classical” Bryan Leo retained his PWR championship in a triple threat match against “The Senyorito” Jake De Leon and The Apocalypse. Also that night, “The Social Media Sinister” Ken Warren won the inaugural Philippine Hybrid X championship with a victory over Ralph Imabayashi.

The show was streamed live online by the Global Pinoy Network (GPN). – Rappler.com