MANILA, Philippines – The NU Pep Squad was crowned the champion of the 2015 UAAP Cheerdancing Competition held on Saturday, October 3, at the Mall of Asia Arena.

With 25,388 spectators in attendance, NU was awarded first overall of the competition for the third time in UAAP history and for the third straight year after totaling 668 points – 91.5 on tumbling, 70.5 on stunts, 84 on tosses, 88 on pyramids, and 340 on dance.

Coming in second was the UST Salinggawi Dance Troupe who had 651.5 points, while the UP pep squad came in third place after garnering 610.5 points.

UP was the lone team without any deduction or penalty points. Adamson had the most with 28, while Ateneo had 27.

In the Group Stunts competition, UST came in first place while NU and FEU placed second and third, respectively.

Here were the other awards handed out: 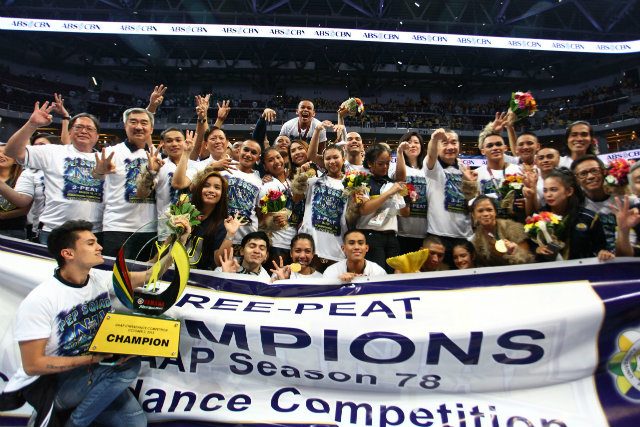