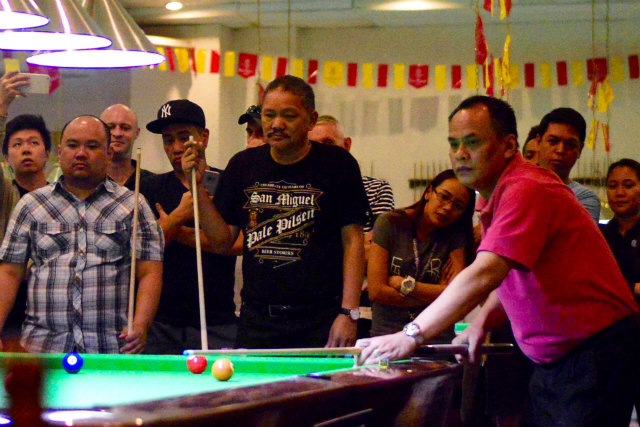 It was a late Saturday afternoon at the Paeng’s bowling center in Eastwood Mall a few weeks ago. Efren Reyes and Francisco “Django” Bustamante were there for a San Miguel Beer fun tournament and meet-and-greet event.

As they waited to play an exhibition doubles game, the two pool legends were in a side room, surrounded by electronic dart machines, with a buffet serving finger food on the table, including cheese sticks in the shape of bowling pins.

Efren and Django were seated on a table, the older Reyes in a San Miguel t-shirt and Bustamante in a red colored sport shirt. They were totally silent, because, well, they were both fast asleep.

Bustamante turns 52 next month and Reyes is 61. Perhaps when you reach that age, it becomes easier to nod off, even while waiting for the final match of the fan tournament, where they would get one amateur player apiece and play in a doubles match. No doubt, these two Lions in Winter are getting on in age, and are looking back at the best years of their careers.

There’s a bit more grey in Reyes’ hair, and Bustamante now sometimes plays with reading glasses perched on his head. But what glory they brought to the country in their prime. Reyes won dozens of titles all over the globe, including world 9-ball and 8-ball championships, plus a U.S. Open 9-ball crown. Bustamante was also a serial tournament winner who finally won his only 9-ball world championship in Qatar five years ago.

They had distinct personas. Reyes the wisecracking, head-scratching grandmaster of pool, Bustamante his swashbuckling, hard-breaking foil.

They helped change the game, not only with brilliant, imaginative shotmaking, but also with a tremendous knowledge of how to play safe and counter-safe back. Thanks in large part to these two, that became the Pinoy trademark: the ability to get out of jail with an almost magical ability to re-safe your opponent back after he thought he had you in a pickle. Reyes and Bustamante’s knowledge of the 3-, or sometimes even 4-rail kick shot was unmatched.

Once in the early aughts Reyes and Bustamante were drawn against each other in a World 9-Ball championship match in Cardiff, Wales. Bustamante won, but in one rack the two exchanged several safeties and counter-safeties back and forth in one rack, enthralling the cognoscenti at hand.

“Playing Efren is like playing against my brother,” said Bustamante once. And when they teamed up, they had their share of success.

In the first World Cup of Pool in 2006 the “magkumpare,” (god-brothers), as they are collectively known, bulldozed the USA duo of Earl Strickland and Rodney Morris, 13-5 to lift the trophy in Newport, Wales. Three years later, in front of a huge and enthusiastic crowd in SM North EDSA, the two edged Ralf Souquet and Thorsten Hohmann 11-9 in the final to gain their second WCOP crown. They are still the only pair to have won it more than once.

Doubles pool is a very different animal from singles pool. Players need to be on the same wavelength and read the table in the same way. Dennis Orcollo, another decorated Pinoy pro, experimented with Bustamante, Ronnie Alcano, and Roberto Gomez before finally winning a World Cup with Lee Vann Corteza in 2013. Reyes and Bustamante just had that chemistry from the get-go, plotting their moves by speaking to each other in Kapampangan while mowing down opponents.

Reyes and Bustamante are no longer the Philippines’ number one choice for the World Cup of Pool, the only regularly running event with doubles aside from, occasionally, the SEA Games. (Carlo Biado and Warren Kiamco represented the Philippines in this year’s WCOP). So the Kings Cup that will take place from this Thursday to Saturday in Resorts World Manila could very well be the last chance to see them work as a team.

This inaugural Kings Cup, organized by Dragon Promotions, is based on the very successful Queens Cup team event that has been held twice already in Resorts World. The only difference being that instead of women players, we have the men. The East team is composed of players from Asia, while the West has shooters from North America and Europe.

Joining the two Pinoy galactics will be Taiwan’s Ko Pin Yi, the best player in the world, who holds the world 10-Ball and 9-Ball titles. His younger brother Ko Ping Chun, also a fine young player, will round out the East team.

Arrayed against them will be a very, very strong West team, with Finn Mika Immonen as the captain. Backing him up will be Darren Appleton from England, a former 10-Ball world champ, Albin Ouschan from Austria, and Shane Van Boening, the 4-time U.S. Open 9-Ball champion who lost this year’s 9-Ball world championship final to Ko Pin Yi. Ouschan, a runner-up to Niels Feijen in the 2014 World 9-Ball championship, is the brother of Jasmin Ouschan, who is a past world champ in the women’s side and has previously played in the Queens Cup.

The matches will be 10-Ball, races to 5 racks. There will be a mix of singles, doubles, triples, and 4-on-4 battle royales. Play will happen from 6 pm to 10 pm every day from Thursday, November 19 until Saturday, November 21, at the atrium of the Resorts World Mall.

The team that gets to 10 matches first can hoist the trophy.

You can watch live streaming on KingsCupPool.com for a fee, or wait until the delayed telecast on ABS-CBN Sports+Action at 10 pm from November 20 to 22. There will be replays next week on the same channel and it will also air on Balls Channel from December 5 to 7.

But in reality, why bother watching on a computer monitor or on TV? This is as good a reason as any to brave the APEC traffic and see two of the greatest Filipino athletes play together for maybe the last time in a competitive environment in person at Resorts World.

On that day in Paeng’s, the two were guardedly confident about leading the East to victory.

“Oo, sisiw yan (yes, it will be easy),” replied Bustamante when asked if they would win easily, a huge smile indicating that he was only kidding.

“Hindi, puro champion ang mga kalaban,” responded Reyes. (No, it won’t be easy. The opponents are all champions.)

On Thursday, the god-brothers are set to duke it out against Ouschan and Appleton in match 3 of the first day of play. They may be playing for a continent this time instead of a country, but they hope to conjure up that winning vibe once again. – Rappler.com