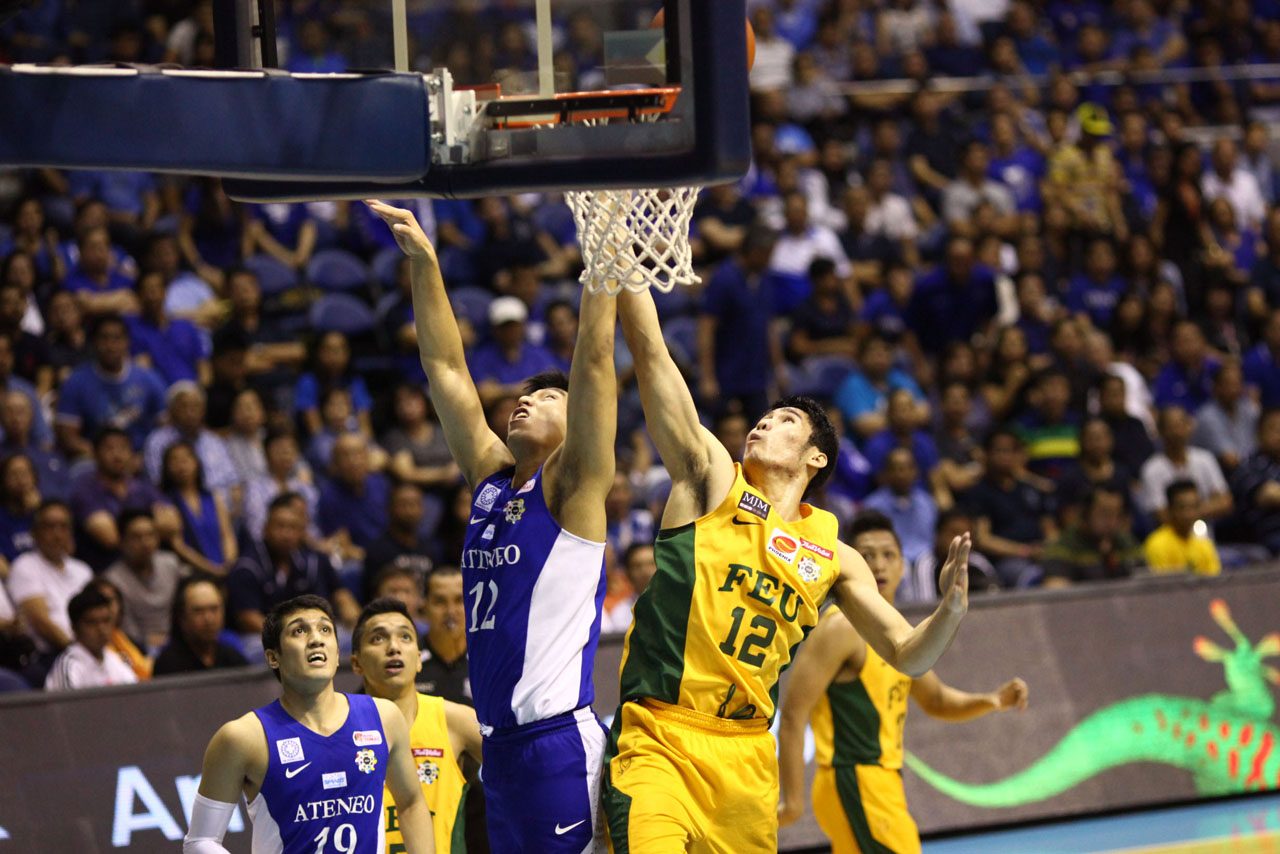 The graduating forward delivered yet another dagger blow in the Final Four for the second straight season, as Far Eastern University escaped the hard-fighting Ateneo de Manila University, 76-74, to book the first Finals ticket in the men’s basketball tournament of UAAP Season 78 on Saturday, November 21 at the Smart Araneta Coliseum.

The veteran Gilas cadet member jumped high over everybody for the offensive board and put back a missed Mike Tolomia scoop shot as time expired to break the 74-all deadlock and avoid overtime.

Belo’s game-winner recalled eerie shadows of another heartbreaker he delivered last season against the DLSU Green Archers by way of the game-winning corner 3-pointer at the buzzer. It was at the same venue, but on the other side of the court.

“I was shocked (that I was left all alone),” said Belo, who finished with 15 points, 9 rebounds, and two blocks for FEU, which entered the UAAP Finals for the second year in a row. “But I realized I was open so I just followed it up. But it was our defensive stop in the end really gave us the win.”

“It was Mac Belo who made the last shot but it was a team effort,” said head coach Nash Racela of his hardworking ward, whose basket ended a wild sequence that also saw Ateneo’s Adrian Wong miss a fastbreak attempt before Tolomia secured the rebound.

“Mike’s attack and Mac’s putback wouldn’t be possible if Roger did not chase down Ateneo’s last attempt.”

Roger Pogoy was the unsung hero of the game with a team-high 16 points that included the cold-blooded game-tying 3-pointer with 1:07 remaining, 74-all.

Tolomia added 13 points and two assists as the Tamaraws now await the winner of the other Final Four match-up between the UST Growling Tigers and defending champion NU Bulldogs.

Graduating back-to-back MVP Kiever Ravena ended his collegiate career with a game-high 25 points on 10-of-19 field goals to go with 3 rebounds, two assists, and a steal in exactly 35 minutes on the floor.

Not wanting for Saturday to be his last day in an Ateneo uniform, Ravena hit big shots in the fourth quarter, including a triple and a jumper that shoved the Blue Eagles ahead, 74-71, with 2:20 left to play.

Amid a roaring blue gallery, and momentum seemingly on their side, it looked like the third seed Eagles would force a do-or-die match against the twice-to-beat Tamaraws – until Pogoy turned things around and Belo broke hearts that bleeded blue and white this time around.

Another graduating player Von Pessumal finished with 15 points and 6 boards in an emotional game, while first year Adrian Wong contributed 17 markers on 3-of-4 3-point shooting.

Mac Belo did it again. As he picked himself up from the floor after his incredible shot, he tapped his heart twice, raised his hand – his expression still straight but somehow still full of emotion.

As his teammates piled up on him, he and the Tamaraws hope that this time, the ultimate outcome in the Finals will be different.