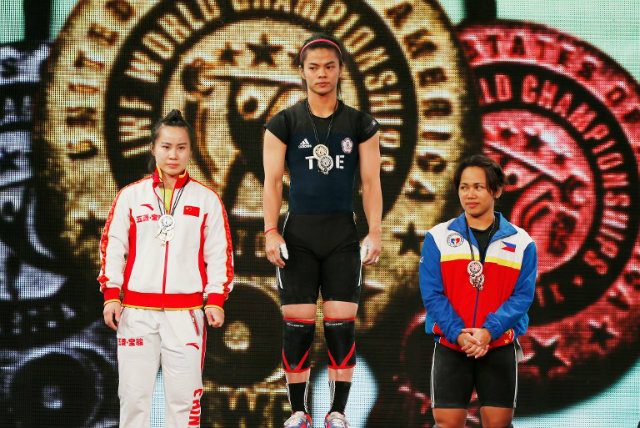 Diaz was dominant at the 2015 Asian Weightlifting Championships, winning gold in all 3 events in the 53kg category in Phuket, Thailand this past September.

The Philippines tacked on another medal in Houston as Nestor Colonia, 23, also of Zamboanga City, earned bronze in the clean and jerk in the men’s 56kg division.

To qualify for the 2016 Olympics, an athlete “invited by the Tripartite Commission must have participated in a minimum of one (1) qualification event,” of which the IWF Worlds is included, according to rio2016.com.

Spin.ph expounds, saying  “An athlete can qualify in the Olympics via team qualification where a country can gain three to six berths based on team rankings in the 2014 and 2015 World Championship, and continental qualification events, or via individual qualification by being one of eight in the top 15 in each weight category from countries which have not yet gained Olympic berths.”

Diaz is also the first Filipina to medal in the competition, according to Spin.

Chen was assured of the gold medal with a lift to spare when North Korea’s Kim failed to make 179kg in the clean and jerk.

“I give him my special congratulations,” the 27-year-old Kim said, while Chen was already looking ahead to the 2016 Rio Olympics, saying it would be his dream to break the record again there.

Kim and Chen are likely to be pressed in Rio by Azerbaijan’s Valentin Hristov, who finished third in the snatch, clean and jerk and total.

Chen Xiaoting led by 5kg after the snatch but appeared to be in trouble after missing her first two attempts at 120kg in the clean and jerk.

Chen made her third attempt and Hsu, who holds the world record for total lift of 233kg, had to lift 125kg to win on body weight after both totaled 221. – Rappler.com with reports from Agence France-Presse