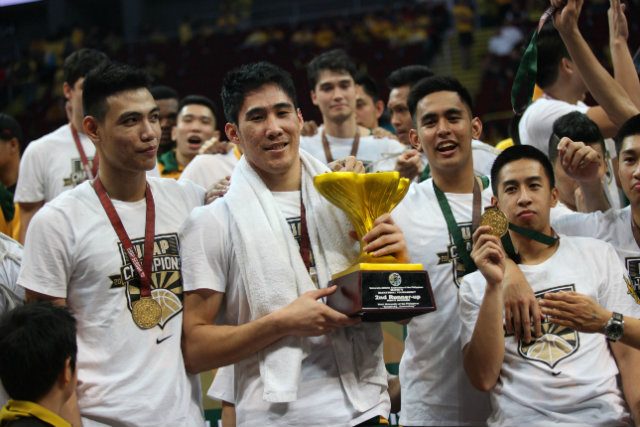 MANILA, Philippines – FEU Tamaraws superstar Mac Belo ended his UAAP career in the best possible fashion as he led his team past the UST Growling Tigers, 67-62, in Game 3 of the finals and was named Finals MVP for his contributions on Wednesday, December 2.

Despite battling through bouts of cramps, Belo finished the game with 23 points and 8 boards to finish the finals with averages of 17.3 points and 10.7 rebounds a game.

This was when Mac Belo was being carried off earlier after suffering cramps. https://t.co/ej7BrvlsxU“>pic.twitter.com/ej7BrvlsxU

(Our teamwork was there, as well as our spirit of not giving up. That’s what we really put in this game.)

(I can’t explain it. We were just so aggressive that we were giving our all.)

Belo, who told his coach Nash Racela that he wanted to play through the cramps, said that the victory was worth the pain.

“Binuhos ko na lahat eh, kaya siguro nag cramps. Pero worth it. Worth it,” he said.

(I gave it my all, which is probably why I was cramping. But it was worth it.)

Belo received a lot of help too. Mike Tolomia scored 13 points in the title-clincher while Roger Pogoy went on a personal 7-0 run in the fourth period and wound up with 14 points and 6 rebounds.

Belo also spent a lot of time guarding UST veteran Kevin Ferrer, who was limited to just 6 points on 2-of-7 shooting. – Rappler.com