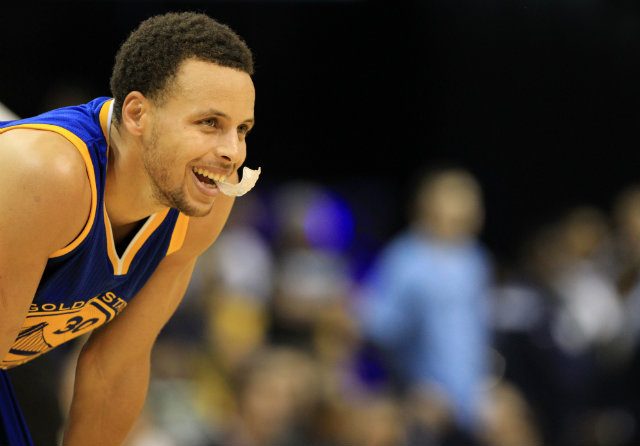 Facebook Twitter Copy URL
Copied
"You've got to be a winner and have all the right trajectory as a player and as a team to back that up," Steph Curry adds

In an interview published Wednesday, December 23 the reigning NBA Most Valuable Player told Time magazine that in the next year, “you should expect me to keep getting better.”

That’s a bold statement from a player on pace to shatter his own one-season NBA record for 3-pointers, who had the Warriors off to a record 24-0 start, and looks set to smash the record for the best season in NBA history, the 72-10 mark by Chicago in 1995-96.

Curry leads the NBA with 31.8 points a game and his Warriors will face 4-time NBA MVP James and Cleveland on Friday for the first time since beating them in the NBA Finals last June.

James, 30, has long been considered the world’s best player, but Curry said he sees himself in that role now.

“In my mind, yes. That’s how I have confidence out there that I can play at a high level every night,” said Curry, 27.

“I don’t get into debates, arguing with people about why I am versus somebody else. I feel like anybody who’s at the level I’m trying to be at, if you don’t think that when you’re on the floor, then you’re doing yourself a disservice.”

Curry, whose father Dell was also an NBA long-range sharpshooter, says he embraces his growing role as what teammate Draymond Green calls “the face of the NBA.”

“You’ve got to be a winner and have all the right trajectory as a player and as a team to back that up,” said Curry.

“The way I try to represent my family and coaches I think all are characteristics the league aspires to portray. That’s just who I am. It’s not changing anything about me to fulfill that role.”

Curry said the athlete he most admires is Jordan Spieth, this year’s Masters and US Open golf champion.

“His maturity, the way he handles himself, his vision as a 22-year-old, is unbelievable,” Curry said. “How composed he is, whether he played well or not, is unbelievable.”

Curry played golf last summer with US President Barack Obama, his father and NBA legend Ray Allen, and said he was more nervous than when he was playing for the NBA crown.

“I feel comfortable on the court,” Curry said. “There on the first tee, it was the president, my dad, Ray Allen, and 40 people in the clubhouse yelling Obama’s name the whole time.

“I’m just trying to make sure I get it in the air. I sprayed it a good 40-50 yards right. But we played the breakfast ball rule. I got to re-tee it. I hit a decent one the next time. I birdied the first two holes.”

Back in the NBA, Curry picked out Los Angeles Clippers’ Chris Paul for special praise.

“The whole team aspect, the history between our two teams but also our history individually. I used to work out with him before my rookie year,” said Curry.

“As you go through the league, you start to try to get to where somebody else is, try to stay there, and the whole competitive environment. But yeah, there are certain guys that drive you because of their success. – Rappler.com