2015: The best of Philippine boxing Facebook Twitter Copy URL
Copied
Pacquiao vs Mayweather may not have delivered, but that doesn't mean there wasn't much to enjoy about Philippine boxing in 2015

MANILA, Philippines – The calendar for 2015 included 365 days, but for Philippine boxing, everything centered around a single date.

May 2 (or May 3 if you were in the Philippines) was the day that the 5+ years of build-up for a clash between Manny Pacquiao and Floyd Mayweather Jr would be settled. The battle between the two biggest boxing stars of the past decade would not be the Ali-Frazier battle which had people talking the next day, but rather the sort of chess match that favored Mayweather through and through.

If people were talking the next day about the fight, they probably weren’t doing so in terms that suggested they were over-awed. There are no guarantees in boxing, and no refunds either.

The lack of action left virtually no desire for a rematch, and Pacquiao, with his torn right rotator cuff requiring surgery, wasn’t in a position to give him one by the time Mayweather retired this year.

Pacquiao, who turned pro nearly 21 years ago, is expected to retire also in 2016, with April 9 against the ever-unpredictable TBA being billed as his final trip between the ropes before focusing full-time on the world of politics. After winning a record world titles in 8 divisions, the Pacman has nothing left to prove. 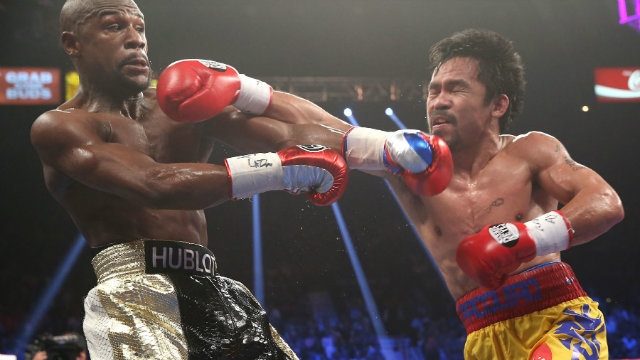 The year began with much promise, but at time of publishing there are only two Filipino world champions (Donnie Nietes and Nonito Donaire) – though it’s not from a lack of opportunity.

But, if there’s one lesson to be learned from 2015, it’s that life goes on. The people who commented “Boxing is Dead!” in the aftermath of the Pacquiao-Mayweather fight weren’t boxing fans to begin with. There will always be great fighters, it’s just a matter of the TV networks and promoters putting in enough effort to cultivate that talent. Now is the time to invest more, not less.

Hopefully the Rio Olympics will give Philippine boxers a chance to shine in the biggest sporting event in the world. Only one Pinoy boxer qualified for the London Games in 2012. It would be refreshing if the Philippines had 3 or more in 2016.

The Philippines dominated boxing at the 2015 Southeast Asian Games (5 golds, 3 silvers, 2 bronzes); what a treat it would be to see Rogen Ladon, Ian Clark Bautista, Mario Fernandez and other standouts in Brazil.

Here is a look back at the year that was in Philippine boxing, and a few reasons to be excited for what it holds in 2016.

Fighter of the Year: Donnie Nietes – “Ahas” Nietes has been nothing if not consistent throughout his career. The WBO/Ring magazine junior flyweight champ had another steady year in 2015, winning 3 title defenses against Gilberto Parra, Francisco Rodriguez and Juan Alejo, while making his American debut atop ALA Promotions’ first U.S. event in his most recent fight.

The win over Rodriguez, a former titleholder at 105 pounds, was his biggest win of the year, and might be one of the 5 best of his career. An injury to his right hand mid-bout may have limited him over the second half of the fight.

Nietes is a fighter you can always count on to get the win – whether spectacularly or not – but has long been overshadowed by the bigger names like Pacquiao and Donaire. After so many years as a background player, his achievements have become hard to overlook.

The 33-year-old from Murcia, Negros Occidental has been undefeated for the last 11 years and won titles in two divisions along the way. Part of the reason why he remains an enigma still to Western audiences is that few fighters in those weight classes are known outside of the most hardcore of boxing circles.

Circumstance may offer him the opportunity at an opponent who most boxing fans are familiar with. Just 4 pounds north is pound-for-pound champ Roman “Chocolatito” Gonzalez, should Nietes ever decide to move up to 112 pounds.

Fight of the Year: Nonito Donaire Jr vs Cesar Juarez

The fight against Cesar Juarez looked on paper to be the perfect style matchup to make Nonito Donaire look like a destroyer again, while putting a recently-vacated title around his waist. Donaire, who was reeling after a technical knockout loss to Nicholas Walters in 2014, needed the boost that comes along with a world title. He got the title belt, but not before engaging in the fight of his life against Cesar Juarez.

For the first 5 rounds or so, it appeared as though Donaire was on his way to a blowout win, hurting the Mexican brawler repeatedly with flush power punches and dropping him twice in round 4. Then Donaire started to tire. Then he twisted his ankle. Then he was cut. Before long, Donaire was finding himself along the ropes trying to fight off an upset artist with nothing to lose.

It was a long night for Donaire, who still managed to hurt Juarez when he landed. Donaire’s early lead, plus a strong finish in round 12, helped him clinch the WBO junior featherweight title, a powerful chip to play in a division where Guillermo Rigondeaux is still the lineal champion, but has become wide open due to Rigo’s inactivity.

Next year promises to have Donaire factor in a big fight or two, but for now, rewatching the Juarez brawl is a fun way to kill some time.

It takes a performance like this to make you realize that Sonsona hasn’t been beaten in 5 years, and that he’s just 26 years old. Sonsona, fighting in his first significant fight at 130 pounds, made sure not to leave it in the judges’ hands when he faced the unbeaten 23-year-old Mexican – who was rated as high as no. 6 by the WBC – in his home country.

Sonsona (34-6-2, 12 KOs) dropped Estrella with a right hook in round two that left him unable to continue. Sonsona, who is the cousin of former junior bantamweight titleholder Marvin Sonsona, has been inactive since that fight, with no bout scheduled for the immediate future.

Canoy (24-6-2, 18 KOs) went right at the former title contender, dropping him 3 times in the first round to finish the job. The first knockdown was a right hand behind the ear from which “Gintong Kamao” never recovered.

Canoy was only able to parlay that big win to a fight against debuting Japanese fighter Hinata Maruta, losing a 6-round decision in November. Francisco went on to face Rigondeaux on short notice, losing a decision in one of the least entertaining fights of the year.

This wasn’t a matter of one punch producing a highlight KO as much as it was Tapales dropping the Japanese boxer every time his glove made contact with his face. Tapales (28-2, 11 KOs) scored 3 knockdowns in round one before he ‘Dempsey rolled’ a right hook off Omori’s face that dropped him for a fourth time.

Omori rose up and was pounded some more before the fight was stopped, but it was the damage done beforehand that earned the 23-year-old from Lanao del Norte this laurel.

With the win, Tapales earned himself a shot at the WBO bantamweight title currently held by Thailand’s Pungluang Sor Singyu. Given how he looked in Japan, you’d have to consider him a world title threat.

Cabalquinto lost his unbeaten record – and his senses for a moment – when the Laguna resident Rivera dropped him early in round two. Cabalquinto, who was 21-0 heading into the fight, was simultaneously struck by a head clash and an overhand left from Rivera (14-2, 12 KOs), caving in the junior welterweight prospect.

Prospect of the Year: Albert Pagara

The 21-year-old junior featherweight from Cagayan de Oro fought 3 times in 2015, scoring knockouts against trial horses designed to take him rounds. The ALA-promoted Pagara, whose record stands at 25-0 (18 KOs), has the look of a future star, with his aggressive southpaw style and colorful hair which make him easily memorable. His clash with former 115-pound titleholder Juan Carlos Sanchez Jr on February 27 in Cebu will hopefully answer whether he can be a champion.

Fighters fight, and good fighters win belts when they fight. The last thing a boxer is concerned about is getting hit with a tax bill when they try to retrieve it from customs.

That’s what happened to Jujeath Nagaowa after she won the Women’s International Boxing Association (WIBA) junior flyweight title on June 6 with a 10-round decision win over Chinese boxer Luo Yu Jie in Macau. The belt was shipped to her later. When she arrived to pick it up, she was asked to pay P20,147.77 ($431) in duties. The surprise bill put her in a bind as she didn’t have the cash on her at the time.

The 27-year-old from Baguio bared her frustration on Facebook, writing: “I gambled my life for a lifetime treasure that others may take over my throne but can’t take this crown.” The post went viral, and a Bureau of Customs official committed to refunding the tax but not before causing some embarrassment.

Trash talk line of the Year: “He wants to join our team. TMT, The Manny Team.” – Manny Pacquiao

Pacquiao may not have earned the decision, but he definitely hit a few zingers at Mayweather in the build-up to the fight. First, Pacquiao announced he would hold his own grand arrival event separate from the one Mayweather had planned, which would’ve turned out to be a troll moment for Mayweather. Pacquiao’s impromptu fan event at Mandalay Bay was a celebration of his Philippine heritage, while Mayweather’s featured rapper Doug E. Fresh making wise crack jokes at Pacquiao fans in the crowd.

When asked about Mayweather’s Philippine flag Money Team shirts that were being sold at the gift shop of MGM Grand, Pacquiao had a line of his own prepared. “He wants to join our team. TMT, The Manny Team.” That round was certainly scored 10-9 for the Pacman.

Jonathan Taconing (22-2-1, 18 KOs) – Should’ve been champion in 2012 when he was robbed of the WBC junior flyweight title on a technical decision in Thailand. The “Filipino James Kirkland” was at his destructive peak against Ramon Garcia in April and is long overdue for a second title shot.

Marc Pagcaliwangan (9-0-1, 7 KOs) – Unbeaten Filipino-Canadian junior featherweight knocked out 9-1 boxer Robert Kanalas in his lone fight in 2015. The 25-year-old free agent needs a busy 2016 – and a promoter/manager with a big vision. – Rappler.com

Ryan Songalia is the sports editor of Rappler, a member of the Boxing Writers Association of America (BWAA) and a contributor to The Ring magazine. He can be reached at ryan.songalia@rappler.com. Follow him on Twitter at @RyanSongalia.