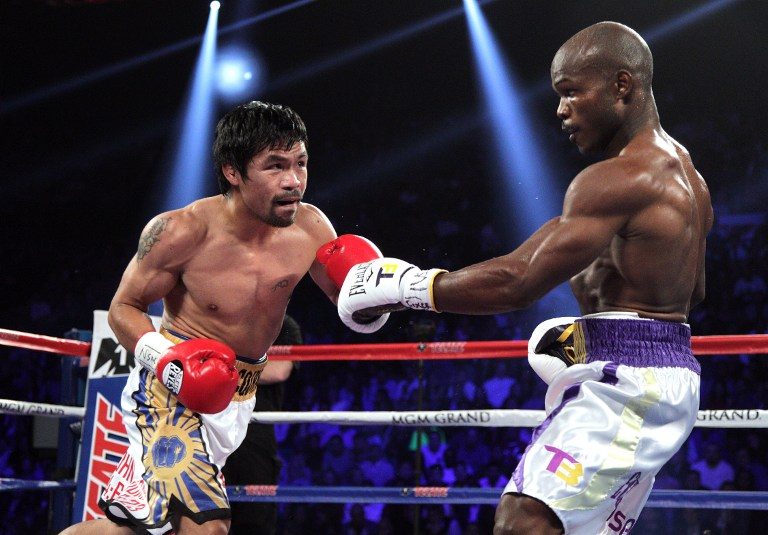 MANILA, Philippines – With a mixture of pride and sorrow, millions of Filipinos Sunday, April 10 (Manila time) celebrated victory for their boxing hero Manny Pacquiao in what he has called his final fight.

Pacquiao, 37, easily won his third battle with American Tim Bradley in Las Vegas, capping a 21-year professional career with 66 bouts under his belt.

He has said he will now retire despite hints by some associates that he could be lured into fighting again.

In the Philippines, just as in his previous bouts, the fight was screened in public plazas and stadiums so adoring crowds could watch the fighter nicknamed the Pacman one last time.

Ariel Toledo, 34, who watched the fight on a widescreen TV under the burning sun in a suburban Manila plaza, was among the many who yearned for Pacquiao to postpone his retirement.

“His fight was okay but he should still continue (boxing) as long as he feels strong,” Toledo said at the end of the match.

“You are the best, Manny Pacquiao,” he said, addressing the screen directly. “We are sad that you will retire. We can no longer watch our Pacquiao.”

Pacquiao, the only man to capture world titles in 8 different weight divisions, produced flashes of brilliance and knocked down Bradley twice on his way to a unanimous decision in the welterweight duel.

It was the sort of performance his admirers believe could persuade him to prolong a career that has earned him more than $500 million over 21 years.

“Of course, all Filipinos are happy because Manny Pacquiao is our idol,” said housewife Nida Realino after the match.

“It’s a pity he has decided this is really his last fight,” she said sadly.

Sportscaster Ronnie Nathanielsz, a longtime Pacquiao follower, agreed that he should retire – except for a possible rematch with American rival Floyd Mayweather, who won a unanimous decision over Pacquiao last year.

“He should retire. If it isn’t Mayweather, then don’t bother,” Nathanielsz said on ABS-CBN television.

Throughout the impoverished nation, Pacquiao has been a unifying factor with millions of Filipinos cheering him on – inspired by his rags-to-riches journey from extreme poverty to become one of the world’s richest sportsmen.

Pacquiao has translated his sporting fame into a successful career as a commercial pitchman, TV show host and even election to the Philippine Congress.

But the evangelical Christian courted international controversy in February – and lost Nike’s sponsorship – by describing homosexuals as “worse than animals” in a TV interview.

“We applaud and thank him for demonstrating anew that the Filipino has the courage and skill to compete in the global arena,” Coloma said.

Aquino and Pacquiao are on different sides politically. The boxer is running in the May 9 elections for a seat in the powerful Senate under the banner of the opposition UNA party.

Municipal employee Gigi Gallardo, 43, said she would follow Pacquiao in politics just as she did in sports.

“He is already rich. He doesn’t have to be corrupt. Give him a chance. There are so many people he can help,” she told AFP.

But political scientist Ronald Holmes said voters would not hold that against him.