Facebook Twitter Copy URL
Copied
Due to overheating of concrete coupled with the 41°C heat index, the 2016 Palarong Pambansa cauldron suffers some damage

“At about 10:30pm, portions of the upper lip cover of the ‘coron’ cracked due to overheating of concrete – burning of the stove plus the heat index of 41C for the past five days since opening,” Albay Governor Joey Salceda explained in a statement on his Facebook account.

Those injured were in the area taking photos, according to Salceda, and were taken to the Bicol Regional Training and Teaching Hospital or BRTTH. They have since been discharged as of 11:30 pm last night.

Salceda quoted PAGASA as saying temperature in Legazpi City hit 32.7°C at 2 pm on Thursday, April 14. But combined with relative humidity of 74%, the heat index reached 44.2°C (what the heat felt like).

The cauldron, which houses the symbolic Palaro flame similar to the Olympic flame, is located at the Albay Sports and Tourism Complex inside the Bicol University Main Campus. It is elevated with stairs and a stage around it where people can climb up and take photos.

Salceda said on his Facebook post that “it has been standard procedure to close the stove after the last game of the night which is about 10 pm.“ 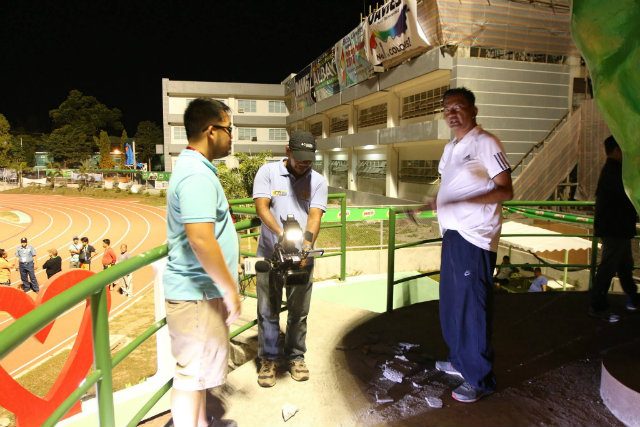 In a text message to Rappler he specified that the urn is switched on again at 7 am “for cost and safety (anything can happen during the night).”

The track oval was on lockdown for two hours last night for investigation but has since been cleared to open in time for Friday’s morning games.

According to Salceda’s post, the Bureau of Fire Protection Legazpi has also cleared the urn for use again but it has been decided that it would not be switched on again for the remainder of the Palaro, which closes on Saturday, April 16.

“For the safety of everyone esp since the weather is likely to be hot in the next two days, we will no longer light the urn using the same gas-based technology,” Salceda wrote. “We will try to produce an Olympic flame symbolically using other means.”

There are no other damages save for cracks in the cauldron’s concrete upper lip. The total cost of damage is from P6,000 to P15,000, per Salceda.

This video taken a day before the Palaro opening ceremony shows the cauldron lit and its structure.

– with reports from Jane Bracher/Rappler.com