Raptors break even with Heat in Game 2 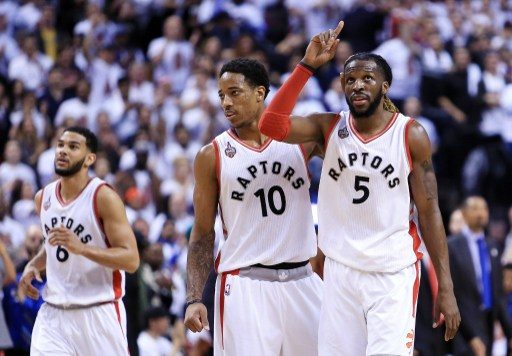 WASHINGTON, USA – DeMarre Carroll finished with a team-high 21 points as the Toronto Raptors evened the best-of-7 Eastern Conference series at 1-1 with a 96-92 overtime win over the Miami Heat on Friday, May 6 (Manila time).

DeMar DeRozan tallied 20 points and 8 rebounds and Kyle Lowry finished with 18 points and 6 assists for the host Raptors, who scored 6 consecutive points to start the overtime then held on for the second round postseason victory.

“We decided to be the more physical team tonight in overtime,” said Lowry. “It was a must win game.

The series moves to Miami’s AmericanAirlines Arena for Game 3 on Saturday.

Goran Dragic led Miami with 20 points, while Dwyane Wade and Joe Johnson had 17 points each in the loss.

Hassan Whiteside contributed 13 points and 13 rebounds for the Heat who made 21 turnovers that resulted in 24 Toronto points.

“I feel like if we don’t keep committing 20-something turnovers, we will be fine,” said Miami’s Wade.

Toronto centre Jonas Valanciunas had 9 fourth-quarter points to help erase what was once a seven-point Heat lead.

Lowry then scored back-to-back Toronto baskets but Dragic hit a 3-pointer with 10 seconds remaining to force the overtime.

The Heat matched a franchise worst by committing 11 first-quarter turnovers, helping the Raptors to a 29-19 lead after one period. Toronto scored 14 points off Miami’s first-quarter giveaways.

“This loss left a bad taste in our mouth,” said Dragic.

Indeed, Dragic, who had a team-high 11 points through two quarters, left the game with less than four minutes remaining in the second quarter with a bleeding lower lip after taking a DeRozan elbow to the chin.

Dragic received 3 stitches on the inside of his lip and 5 on the outside. His bottom teeth were pushed through the lip.

The Heat played on Thursday without Chris Bosh, who spent his first 7 seasons in Toronto.

The 32-year-old veteran has not played since the All-Star break after a blood clot was discovered in his left leg. – Rappler.com