WWE returns to Manila for live show in September 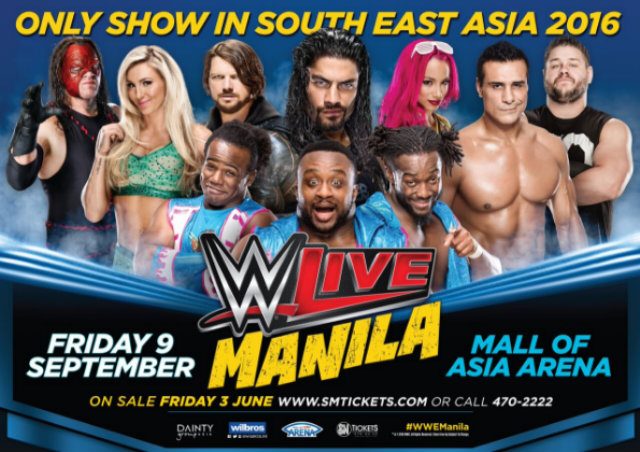 Facebook Twitter Copy URL
Copied
WWE will hold its first show in the Philippines in 7 years on September 9, with World Heavyweight champion Roman Reigns announced for the event

MANILA, Philippines – World Wrestling Entertainment (WWE) will return to Manila for a live show on Friday, September 9 at Mall of Asia Arena, the first time the sports entertainment company has held an event in the Philippines since 2009.

WWE Live Manila, as the event is titled, was announced by WWE in conjunction with events companies Dainty Group Asia & Wilbros Live on Wednesday, May 25. The show will be WWE’s only stop to Southeast Asia this year.

“WWE is excited to return to the Philippines, giving WWE’s passionate fans the chance to see their favorite Superstars in an energetic, larger-than-life event, for the first time in seven years,” Gerrit Meier, WWE President, International said in a statement. “WWE Live Manila will deliver the same non-stop action and family fun that fans know and love from our TV programs on FOX Philippines and WWE Network.”

Tickets for WWE Live Manila go on sale Friday, June 3 at 9am, and can be purchased online at www.smtickets.com; by calling the SM Tickets customer hotline at +632 470 2222; or by visiting any SM Tickets outlet. Ticket prices will be confirmed at a later date. – Rappler.com