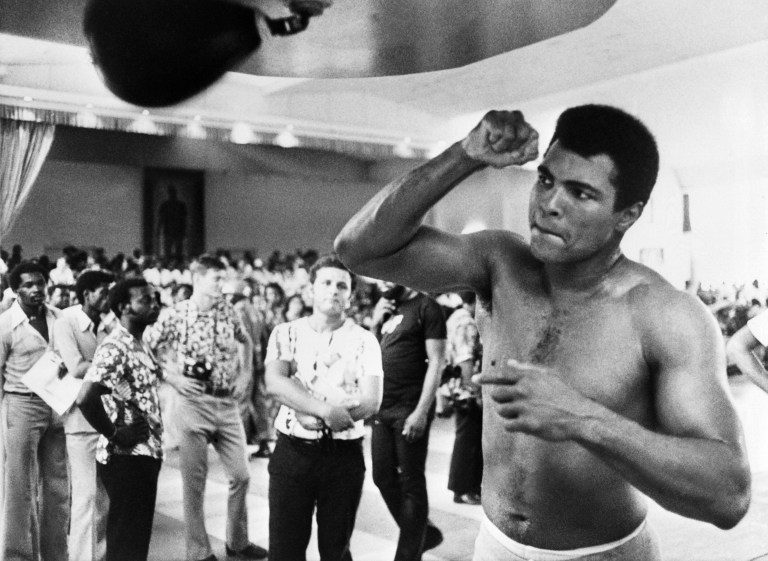 MANILA, Philippines (UPDATED) – He could float like a butterfly and sting like a bee. Now his once swift hands and feet are at eternal rest. Boxing legend Muhammad Ali has died at age 74.

Ali, a 3-time heavyweight champion and generally regarded as the most influential sports figure of all time, died Friday, June 3 (Saturday Manila time) at a hospital near his home in Phoenix, Arizona, a spokesman confirmed to NBC News. Ali had been hospitalized for the previous two days due to respiratory difficulties. He had been suffering from Parkinson’s disease since 1984.

He was initially announced as being in “fair condition” and expected to have a short hospital visit, but by the second day a spokesman had revealed that his condition was “very, very grave.”

Ali, born Cassius Marcellus Clay in Louisville, Kentucky, first rose to international fame in 1960, winning light heavyweight gold at the 1960 Olympics. Known for his boastfullness and for predicting the rounds he’d beat his opponents in, Ali defied every boxing convention with his style, bouncing around like a welterweight on his toes, hands at his side as he snapped punches from his waist. He shuffled his feet to befuddle opponents and stood triumphantly over fallen opponents like a general conquering a neighboring region.

The fighter then known as Clay entered his 1964 heavyweight championship fight against Sonny Liston as a 7-to-1 underdog before forcing Sonny Liston to retire on his stool in Miami, Florida after the sixth round.

He formally changed his name afterwards to Ali and announced he had converted to Islam.He remained just as dominant in the ring, knocking out Liston with a “phantom punch” in a rematch 9 months later before racking up defenses against Floyd Patterson, Cleveland Williams and Henry Cooper.

He would become just as pugnacious out of the ring for his outspokenness about civil rights and the growing sentiment against the Vietnam War. Ali would lose the heavyweight title in 1967, not to any opponent in the ring, but to the United States government after refusing to be inducted into the Army to serve in the Vietnam War as a conscientious objector.

“My conscience won’t let me go shoot my brother, or some darker people, or some poor hungry people in the mud for big powerful America. And shoot them for what? They never called me nigger, they never lynched me, they didn’t put no dogs on me, they didn’t rob me of my nationality, rape and kill my mother and father.

“How can I shoot them poor people? Just take me to jail.”

Ali would miss over 3 years of his prime before returning to the ring in 1970, winning two fights before meeting the newly crowned and fellow unbeaten Joe Frazier in 1971 at Madison Square Garden  what was called The Fight of the Century. Ali, with his feet slowed by years of inactivity, took a pummeling late in the fight and was knocked down in the 15th round and lost a unanimous decision.

Ali won a greater fight later that year when his Supreme Court appeal overturned his conviction for draft evasion, vindicating him and allowing him to pursue the heavyweight championship without concern of imprisonment. 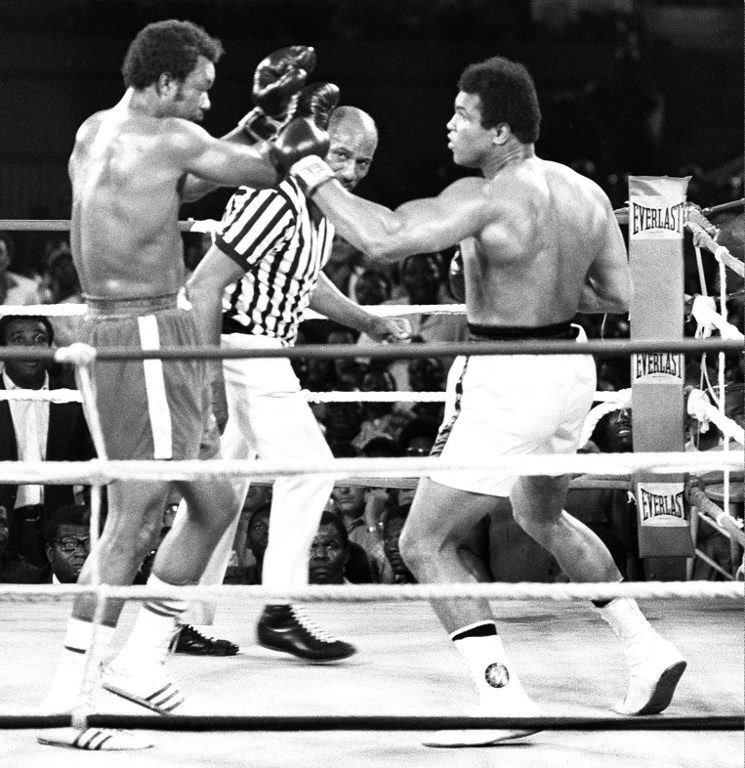 Ali would lose again, this time by decision to Ken Norton after suffering a broken jaw in 1973, but he avenged his losses to Norton and Frazier before earning a shot at the new champion – the unbeaten powerhouse George Foreman in 1974.

Foreman, a 1968 gold medalist from the same city in which Ali defied orders to step forward to join the military, Houston, Texas, had knocked out Frazier in two rounds to win the title, and Norton in two to defend it. It was thought that Ali would suffer the same fate in Kinshasa, Zaire.

Billed the Rumble in the Jungle, Ali used his “rope-a-dope” defense to tire out the immature and over-anxious Foreman before knocking him out for the count in round 7 in yet another major upset.

Whereas Ali was booed by fans in his first title reign, he became a fan favorite the second time around as people gravitated towards his underdog appeal – both in the ring and out of it. He’d have his greatest battle in the ring in 1975, when he faced Frazier for a third time at Araneta Coliseum in Quezon City, Philippines.

The fight dubbed The Thrilla in Manila pushed both men to their physical limitations as they battled the tropical heat in addition to their opponent. In the end it was Frazier who couldn’t answer the bell for the 15th round and Ali was declared the winner. The fight is often cited as the greatest bout in professional boxing history.

(READ: One hot morning in Manila: Looking back 40 years after Ali-Frazier III)

The Thrilla would be Ali’s apex as a fighter, and he’d reign for two more years before losing to upstart Leon Spinks by decision in 1978. Ali regained the title later that year, becoming the first 3 time champion before announcing his retirement. He’d return to the ring in 1980 for two ill-advised fights, being stopped for the only time in his career against new champion Larry Holmes, a former sparring partner of his, before losing a decision to unheralded Trevor Berbick the following year in the Bahamas.

Ali’s speech and mobility, which had made him the most famous person on the planet, became impaired due to Parkinson’s disease, which some doctors theorized was caused by blows to the head incurred during his boxing career. Yet even as his body began to atrophy, he was able to evoke powerful emotion. At the 1996 Olympics in Atlanta, Georgia, Ali moved many to tears as he lit the Olympic torch, performing his duty with dignity even as he shook visibly due to his affliction.

Following the September 11 terrorist attacks, Ali defended Islam while denouncing Al Qaeda. “I wouldn’t be here representing Islam if it was really how the terrorists made it look. I think all the people should know the truth and come to recognize the truth because Islam is peace. It’s against killing, murder. The terrorists and the people doing it in the name of Islam are wrong. And if I had the chance I’d do something about it,” said Ali.

His final political statement came in December of 2015 as he once again defended his religion against the terrorist attacks in Paris and San Bernardino, and less directly, the calls by US politician Donald Trump to ban Muslims from entering the country. “I am a Muslim and there is nothing Islamic about killing innocent people in Paris, San Bernardino, or anywhere else in the world,” Ali said.

Ali’s health had become a concern in recent years, and in 2014 he was hospitalized for pneumonia, and the following year for a urinary tract infection. He leaves behind 7 daughters and two sons, and his wife Lonnie.

Funeral arrangements will reportedly be held in his hometown of Louisville and will be announced on Saturday, US time. – Rappler.com