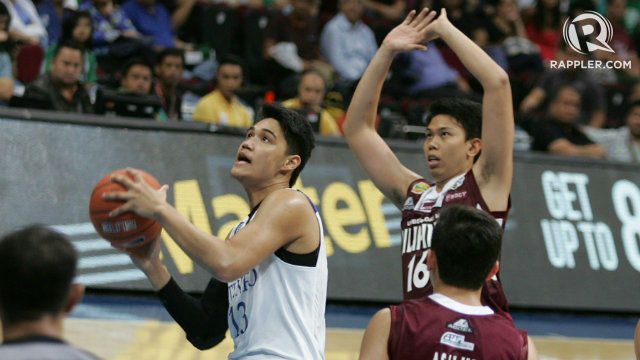 MANILA, Philippines – After being unable to meet Ateneo’s passing grade in order to play in the upcoming UAAP men’s basketball season, former Rookie of the Year Arvin Tolentino is nearing a transfer to Far Eastern University, Rappler has learned.

A source said on Saturday, June 11, that Tolentino is set to join Coach Nash Racela’s FEU Tamaraws after having two meetings with Far Eastern U management.

The source said that FEU is the “frontrunner” and that the move could be made official as early as next week, assuming both sides finalize on the remaining details that need to be worked on for an agreement.

According to the source, Tolentino also considered a return to San Beda to play in the NCAA as well as joining Coach Eric Altamirano’s National University, while Coach Franz Pumaren and the Adamson Soaring Falcons also expressed interest.

Tolentino, who was named the best freshman of the UAAP back in 2014, played two years with the Blue Eagles following a successful high school career with the San Beda Red Cubs. He quickly established himself as one of the best young prospects in the college basketball scene with high-scoring performances.

In his freshman season, Tolentino averaged 8.0 points and 5.6 rebounds a game, per humblebola. Additionally, he scored at least 10 points in 5 games, displaying both an inside and outside game on offense.

Tolentino saw his minutes decline from 22.5 a game as a rookie to 10.7 a game during his second year. His numbers also decreased to 5.1 points and 2.4 rebounds a contest, but he did have a 20-point performance against UST during the elimination round.

FEU is coming off two straight UAAP Finals appearances and last year won the title after a 3-game series against the UST Growling Tigers. Tolentino will have to serve a year of residency before getting to play for the Tamaraws due to the UAAP’s rules for transferring students. – Rappler.com