Folayang willing to stay with ONE FC, but eyes UFC Manila card 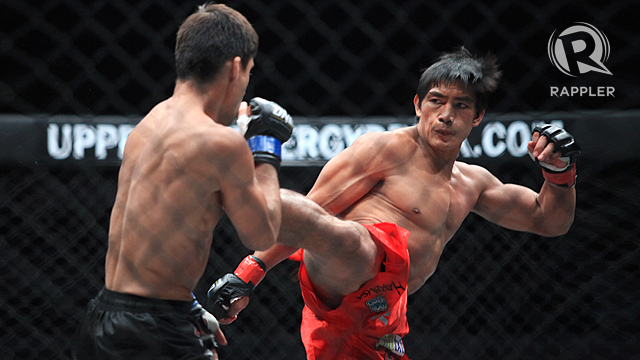 MANILA, Philippines – Homegrown talent Eduard Folayang is not closing the doors on the possibility of seeing himself inside the ONE Championship cage again as the Singapore-based mixed martial arts (MMA) company invokes its “right to match” clause.

Reports circulated online on Monday, July 4 that Folayang’s exclusive deal with ONE Championship had expired, leaving him available to sit down and talk to other MMA organizations for a possible enlistment.

The 32-year-old Baguio City native confirmed to Rappler that his multi-fight agreement ended last March, but he is currently in a negotiation period with ONE Championship as it opted to exercise its right to match contract offers to the renowned Filipino fighter from different MMA promotions.

“Yup, it is true,” Folayang quipped.

Folayang revealed that ONE Championship has already extended its new proposal, but he refused to divulge details about it.

According to Folayang, he has no qualms with staying in ONE Championship, the company he has spent nearly 5 years of his 20-fight professional career with.

In addition, Folayang has been in ONE Championship since the company’s inception in 2011 and has fought 8 of his last 10 outings under the promotion’s umbrella.

“It really depends. I really had a beautiful relationship with ONE Championship for the past 5 years,” he said.

Company chairman Chatri Sityodtong told Rappler that matchmakers are considering adding more star power to ONE Championship’s ninth trip to the Philippines on December 2 by including Folayang and his fellow Team Lakay standouts Geje Eustaquio and Kevin Belingon.

“We’re definitely going to have some of the biggest Filipino superstars back. I hope to see Eduard Folayang. I also hope to see Geje Eustaquio and Kevin Belingon,” Sityodtong claimed.

However, Folayang admitted that there are too many things to consider, including remaining active throughout the remainder of 2016.

In a past interview with Rappler, Folayang sought to stay busy this year as he was shelved for nearly 14 months due to a brutal knockout loss to Russian prospect Timofey Nastyukhin in December 2014.

The 5-foot-9 Team Lakay representative confided that various MMA promotions have already made their offers, but he declined to name one.

“ONE Championship has already sent their contract proposal. We are looking at it. There are also different organizations that are more than willing to sit down and negotiate,” Folayang shared.

Folayang indicated that he’d like to be part of the Ultimate Fighting Championship’s second live event in the Philippines on October 15.

“Well, I hope to be part of the UFC. It’s a great venue, especially they will be here in October,” he stated.

Folayang is one of the logical choices in the Asian MMA circuit to be booked for the card dubbed as “UFC Fight Night Manila 2,” which takes place at the 20,000-seater SM Mall of Asia Arena in Pasay City.

Widely regarded as the face of Philippine MMA, Folayang rose to prominence in the Universal Reality Combat Championship, where he captured the organization’s welterweight belt and listed 7 impressive victories with 4 coming by way of first-round knockout.

Known by the moniker “Landslide,” Folayang could be the fourth Team Lakay member to join the UFC roster.

“There are many options on the table. My team and I will look keenly at every detail and weigh the opportunities that we can get in the future,” he asserted. – Rappler.com