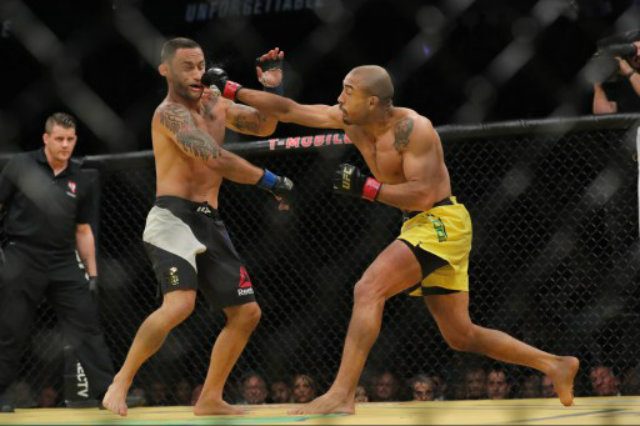 The 27-year-old Brazilian expertly countered his smaller American opponent, busting him up with jabs, right hands and a beautifully-timed knee to the midsection.

Aldo rebounded from a shocking 13-second knockout loss to McGregor last December by outpointing Edgar via unanimous decision with the scores of 49-46, 49-46 and 48-47.

After the results were read, Aldo pointed toward McGregor, who was sitting in the front row section and responded by smiling and waving at him.

Aldo appears to be eager to get inside the Octagon and put his hands on McGregor, who is scheduled to have a second welterweight encounter with Nate Diaz at UFC 202 on August 20.

UFC president Dana White guaranteed Aldo that McGregor will have to return to the featherweight division to defend his gold-plated strap after his much-awaited bout versus Diaz.

“I think it’s great,” Aldo said about White’s promise. “I am prepared for him. We can fight right now if he wants to.”

Aldo stressed that he has no qualms about sharing the UFC cage once more with McGregor, despite many cageside observers worrying that he could suffer the same fate against the brash Irishman.

“My chin is fine. I feel great. I even let the goatee grow so it would be stylish. There are no ghosts [from the loss] or anything,” Aldo assured. – Rappler.com