As a member of the Philippine national boxing team for over 10 years, Charly Suarez has waited a long time to make his Olympic debut. The lightweight from Sawata, San Isidro Davao del Norte will finally get his chance to vie for gold at the 2016 Games in Rio de Janeiro, Brazil, joining light flyweight Rogen Ladon as one of two boxers representing the Philippines.

Suarez, 27, has a wealth of experience at the top level of international competition, having won gold medals at the 2009 and 2011 Southeast Asian Games, a silver medal at the 2014 Asian Games, as well as silvers at the 2011 and 2014 President Cups in Indonesia and Kazakhstan, respectively.

Suarez also spent time based in India as part of the Mumbai Fighters in the AIBA World Series of Boxing in 2012, and in 2013 in Italy with the Italia Thunder.

Suarez, an only child, first began boxing at age 7 after his father introduced him to the sport. He made the national team after succeeding at the 2003 National Open in Tagbilaran City, Philippines and worked his way up from the youth team.

Suarez got his first taste of the world stage at the 2007 AIBA World Championships in Chicago, losing in his first fight, but made a better showing two years later at the 2009 Worlds in Milan, Italy, defeating Julian Stan of Romania in a preliminary bout before dropping a decision in the quarterfinals to South Korea’s Joo Min Jae.

Suarez fell one win short of qualifying for the 2012 Olympics after losing in the final to his Chinese opponent Liu Qiang at the Asian qualifiers. Instead of allowing it to discourage him, Suarez used it as motivation for the 2016 qualifiers. It paid off when he stopped China’s Shan Jun in two rounds in the Asia-Oceania qualifier semis in March of this year to the stunned response of the Chinese crowd, breaking his nose and punching his ticket to Rio.

“Last 2012 I wasn’t fortunate but this time around, it was given to me by the Lord to be able to compete in the coming Olympics in Rio. So I grabbed it then I’ll do my best to bring home a medal, first for the Lord, and then for family and country.”

Ed Picson, executive director of the Association of Boxing Alliances in the Philippines (ABAP), says his mental maturity as well as his physical power are what make him the fighter he is.

“Charly works hard, and he’s a power puncher and he’s constantly studying ways on how to maximize that power. He listens to the coaches and then he works hard with them. He observes other fighters and is very keen on studying other styles of other boxers. He’s very observant and he likes to be able to learn more about his craft,” said Picson. 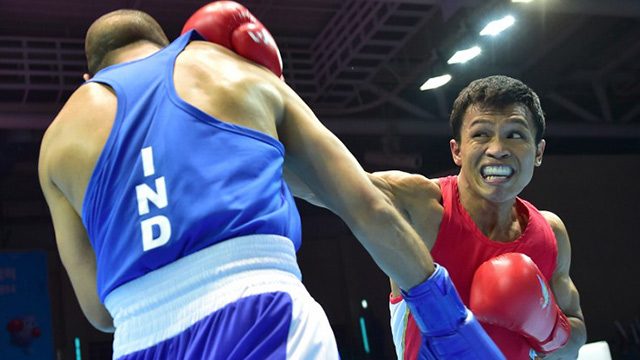 The deeply religious Suarez hopes to make an impression in Rio that is deeper than wins and losses.

“I said ‘this fight isn’t for me.’ I bring the glory and honors to God because I know that it’s His gift to me.

“I fight in the Olympics so that I could introduce God to the people around the world that don’t know Him.” – Rappler.com