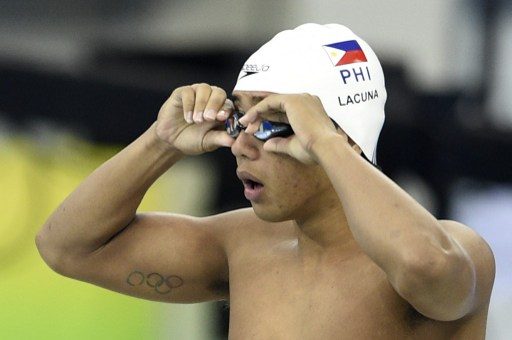 Facebook Twitter Copy URL
Copied
The Atenean was once teased by his older brothers who had won swimming titles before him. Now he's representing the Philippines for the second time at the Olympics

As far as he can remember, Jessie Lacuna was always a competitive person.

At the age of five, his mother, Corazon recalls that he crawled on his own volition towards the swimming pool that he also says called out to him. “I took to it like a fish to water,” laughed Jessie, 22, at the memory.

“In the water, I feel relaxed; like I’m in another world. While being in the water helps clear my mind it is the opposite when I’m in training or race mode… I’m like a shark. I get intense and locked in.”

The Lacuna family used to own a resort in Pulilan, Bulacan called Villa Lorenzo (it has since been sold). His older brothers Jay and Billy were the kings of the pool and later the toast of this rural town in Northern Bulacan.

The two elder Lacuna brothers had gone on to Manila to take their college at the University of Santo Tomas where they became champion swimmers. When they would go home for vacation, in the spirit of sibling rivalry, they teased young Jessie. Taunted him even.

They always got Jessie’s goat easily. “Both of them would boast about their exploits, their swimming marks,” recalled Jessie with a gleam in his eye. “One time, I got tired of it and said, ‘I’m going to not only beat them but break all their records.’”

Fifteen years later, Jessie was in Australia for a 3-month training period as sponsored by the Philippine Olympic Committee in preparation for the 2016 Rio Olympics. Jay was now working Down Under as a nurse and the two had a nice reunion. “I’m proud of you, little brother,” said the eldest of the brood of 5.

“Thanks, bro.” said Jessie returning the embrace. “So that you know, I broke your records.”

The younger sibling had to get that last word in edge-wise. And what made Jessie’s feat even more impressive was that he was only in high school when he broke the marks his older brothers set when they were in college.

“And I never doubted you would,” returned Jay magnanimously.

Billy as well doesn’t swim anymore as he works as a medical representative in Pasay City. But the two, as well as the whole Lacuna family, are doubly excited that through Jessie, he will live out their Olympic dream.

Twice in Jessie’s life it seemed like such a far-fetched dream.

As soon as he made his way to the diving docks at the Aquatics Centre during the 2012 London Olympic Games, Jessie began to cry. “Those were tears of joy, fun, anxiety. I was speechless. I was in shock. I cried.” he related. Results-wise, he finished 36th among all competitors and was unable to make it to the semi-finals.

“I was overwhelmed that first time,” he rued.

After the Olympics, as much as Jessie tried, he didn’t swim well in his next meets.

“He became very unhappy,” said Archie Lim, Lacuna’s swimming coach and program director in Ateneo where Jessie is enrolled for college. “There was a string of performances where he thought that he wasn’t improving and that made him want to quit.”

“I was at a point where I thought my career was over internationally and that I’d just swim for Ateneo in the UAAP,” chimed in Lacuna, a two-time UAAP MVP.

Coach Archie however remained determined to help his ward regain his focus.

“I was unsuccessful in my initial attempts to recruit him for Ateneo,” said Lim. “Watching him from afar, I saw how he struggled.” After London, Lim gave Jessie time to sort his life out then made a pitch.

His older brothers helped him figure out where to go and what to do. “There were only 4 schools for me to choose from — Ateneo, La Salle, UP, and UST,” Jessie shared. “My brothers said, ‘Try another school’, so that eliminated UST. La Salle didn’t seem interested until late, so it came down to Ateneo and UP. I attended this orientation in UP but didn’t see a career path laid down by the coaches. Ateneo laid it out for me. Education-wise, I was going to get it from both Ateneo and UP, so the deciding factor came down to the swimming career path.”

“Coach had a plan but more than the plan, he believed in me and never gave up on me,” said Lacuna. “Coach Archie kept pushing me and he outlined these short-term goals and gains with an eye for the long-term.”

Jessie’s mindset changed following the FINA (the Fédération Internationale de Natation) World Championships in Barcelona in 2013 where he performed very well, finishing 40th at 1:51.76, less than 5 seconds off first place.

The results were the first positive ones he had received in a long time and it lit a fire under him. 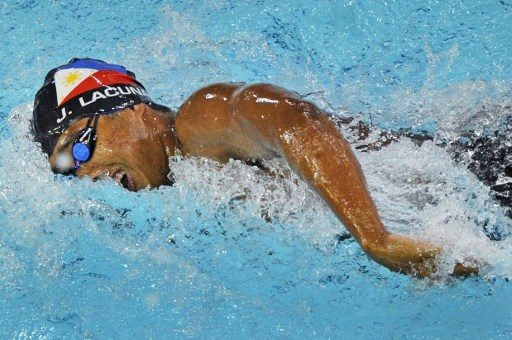 Lacuna followed that up with a silver and two bronze medals during the 2015 Southeast Asian Games in Singapore that earned him the nod from FINA. He formalized his entry to Rio when he made the swimming body’s list of qualified athletes after the 2016 Swimming Australia Grand Prix that was held in Brisbane from July 1-2.

“Training alone in Australia for 3 months, I learned how to cook, keep my place clean and that I can speak English,” laughed Lacuna. The time away forced him to grow up quickly and appreciate the world through different eyes. “I became more appreciative of what I have been blessed with,” he admitted.

“I never thought I’d make it back to the Olympics and maybe this time, I can redeem myself,” postulated Jessie on the eve of his departure for Brazil.

“More than bringing glory to the country, I hope that with my performance, our sports officials will give the homegrown athletes another look. I hope that I can inspire others to take up not only swimming but any sport.

As a youngster, he quietly wondered why most of the national swimmers were Fil-Ams. It wasn’t that he was against them, it just “became a mission to prove that the homegrown Filipino could be just as good if not better. And if I could perform well, maybe it will inspire others to also take up swimming and that government officials and corporate sponsors could help build pools for kids.”

While there aren’t any new pools in Pulilan, Bulacan, people come far and wide to visit his parents’ store that has since replaced the resort that they’ve sold. “They come over and ask if this is where I live and grew up. They offer congratulations and wish my family well. It’s touching and I am grateful.”

“I am proud of my hometown,” says the two-time Olympian. “I make no bones of where I am from. Every chance I get, I go home. The pool, the water may have this calming effect on me; makes me feel relaxed or I’m in another world, but Pulilan is home.”

The day before the Philippine delegation to the 2016 Rio De Janeiro Olympics was to depart, Jessie, who had not tasted his mother’s home cooking in over 3 months, went home. It was a tearful and joyous reunion.

“When I started out, swimming was an interest. It became an obsession and then a career. Now, it is a means to an end, to get an education, to represent my country, and to hopefully provide inspiration for others to follow.” – Rappler.com