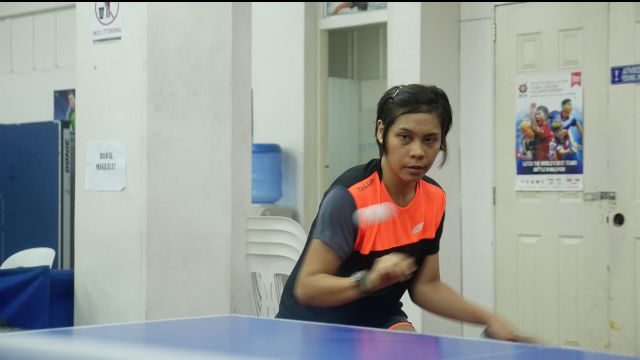 RIO DE JANEIRO – The 7 Filipino athletes from 5 different sports plunged into training Tuesday, July 26, most of them doing morning and afternoon sessions, as the 2016 Rio Olympics moved just 9 days away from its opening ceremony.

Table tennis bet Ian Lariba was at her venue in the morning and spent another two hours trying to familiarize herself with the tables to be used, the ball speed, the flooring and the competition venue.

Lariba, tasked to carry the flag in the August 5 opening ceremony, is having mixed emotions heading to the competition. It’s the first Olympics for the 21-year-old native of Cagayan de Oro and student of De La Salle University,

“I’m nervous and excited at the same time. There’s pressure,” she said Tuesday evening at the dining hall of the Athletes Village, where she moves around always accompanied by her South Korean coach Mi Sook Kwon.

Swimmers Jessie Khing Lacuna and Jasmine Alkhaldi were at the pool twice in the day, and spent two hours on each visit. They were joined by their respective coaches, Archie Lim and American Jennifer Buffin.

“I guess everybody’s feeling better now. We’re all sleeping better. We’re all rested,” said Lacuna, who headed to Rio from a 3-month training stint in Australia. In that long period, he was alone. He said it was his longest overseas training.

Last Monday, members of the Philippine delegation took it easy, moving around Rio de Janeiro in rented vans trying to shake off jet lag and familiarizing themselves with the surroundings.

Alkhaldi arrived in Rio the other day, traveling from her base in Hawaii via Dallas and Miami for a duration of 31 hours. She is entered in the women’s 100-m freestyle while Lacuna will swim in the men’s 400-m freestyle.

Unlike Lariba, both Lacuna and Alkhaldi know how it feels being in the Olympics, having represented the country in the 2012 London Games.

Weightlifters Nestor Colonia and Hidilyn Diaz also started to flex their muscles. They were at the training venue at 6 pm.

Diaz, the 2012 London Olympics flag bearer, is in her third Olympics. She said she felt a lot better Tuesday than the past few days because she was coughing. Team physician Ferdinand Brawner is attending to her.

“We always do that,” said Alora of her sparring session with the 6-time SEA Games champion from 1991 to 2001. Back home, the 26-year-old Alora normally trains and spars with male members of the national pool.

Marestella Torres of long jump, in her third straight Olympics like Diaz, also trained with her coach, Joebert Delicano.

Boxers Rogen Ladon and Charly Suarez will arrive in Rio on Wednesday evening from Las Vegas, accompanied by coach Nolito “Boy” Velasco, the lone boxing coach from the Philippines with a Rio Olympics credential.

Organizers are very strict in issuing credentials to officials, including coaches and trainers and therapists from each country, limiting the number to the lowest possible.

Three other Pinoy athletes to this Summer Games, who are 12 in total, will arrive one by one in the coming days – track and field bets Eric Cray and Mary Joy Tabal from Hawaii and Japan, respectively, and golfer Miguel Tabuena from Manila.

Chef-de-mission Jose Romasanta is making sure everything is in place for the Philippine delegation here in Rio. He is joined here by Philippine Olympic Committee officials Jeff Tamayo, the second vice president, and Julian Camacho, the treasurer.

The Philippines is seeking to end a 20-year medal drought in the Olympics. The last time a Filipino athlete came home with a medal was in 1996 from Atlanta when boxer Mansueto “Onyok” Velasco won the silver in the light-flyweight division.

“Things are in place. Our athletes are fully rested now and are seriously training. We still have nine days to the opening. If everything falls into place, the medal or medals will come,” said Romasanta. – pool report by Gilbert Cordero/Rappler.com