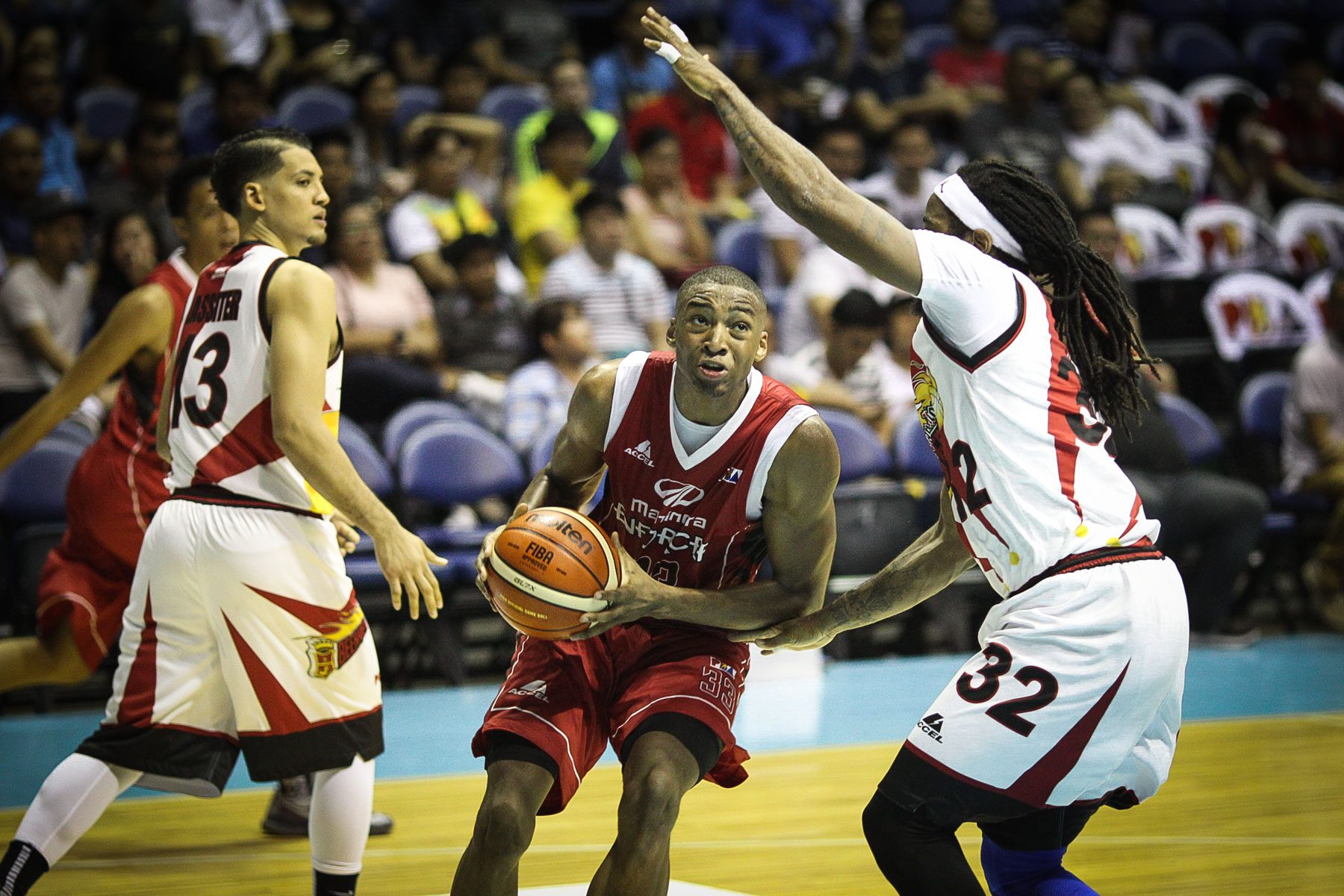 MANILA, Philippines – With a distinguished figure watching from the stands, the Mahindra Enforcer stayed undefeated in the 2016 PBA Governors’ Cup by outlasting defending champions San Miguel Beermen, 105-103, on Wednesday, July 27, at the Smart Araneta Coliseum.

Legendary Filipino boxer and Mahindra’s original playing coach Manny Pacquiao was in attendance to watch his team for the first time since he left his post. And although the newly elected senator went from the sidelines to the bleachers, he still has quite an effect on the team.

“I was not expecting him, not at all,” said head coach Chris Gavina after the game. “His presence alone gave a double incentive for us, motivation-wise and inspiration-wise. Every time you see Manny you really want to go to work for him.”

Pacquiao, who is expected to come out of retirement later this year for another fight, made sure to visit the team’s locker room at halftime and left his former players with a message.

“He said just stay focused, stay in the moment,” Gavina shared. “Make sure we follow our game plan and just believe and trust in one another.”

That message came in handy when Mahindra blew a 12-point deficit midway in the fourth quarter and allowed San Miguel to take the lead with 3:48 to go. A nip-and-tuck stretch ensued as the number of lead chances swelled to 26 before Paolo Taha and Chito Jaime ended the exchanges with the marginal fastbreak layup and two free throws for the 105-102 lead with 43.1 ticks left.

June Mar Fajardo had a chance to cut the deficit to two but split his charities. Mahindra dodged a big bullet after an errant pass from LA Revilla resulted in a critical turnover leading to a 3-point attempt by import Arizona Reid for the potential game-winner. His shot bounced off the rim and Revilla secured the rebound as time expired, with Mahindra clinching its first-ever 3-0 start.

“Our guys showed our fortitude,” said Gavina. “We’re really coming in, just like all other games, we’re approaching everything like a playoff game. There’s really a do-or-die attitude there.”

Import James White topscored for the Enforcer with 34 points and 11 rebounds, while Niño Canaleta went 4-of-9 from deep for 17 points. Taha finished with 12 points, 3 rebounds, and 3 assists, as Keith Agovida chipped in 10 markers off the bench.

Mahindra improved on its franchise-best start with a 3-0 record to lead the standings, and at the same time extended a winning streak over San Miguel in import-laden conferences at 4-0 since last season, according to PBA statistician Fidel Mangonon III.

Reid posted 43 points, including 25 in the second half and a 16-point second quarter, on top of 11 rebounds and 3 assists.

Alex Cabagnot, whose triple sparked the Beermen’s fourth quarter rally, had 15 markers and 5 dimes. Fajardo came off the bench for a quiet 13-point, 10-rebound night with 5 turnovers.

Ryan Araña and Marcio Lassiter had 11 and 10 points, respectively, for the now 2-1 Beermen.

San Miguel became the latest victim in Mahindra’s early assault this conference, after the Star Hotshots and the Globalport Batang Pier.

Similar to the previous game, Gavina left his team with another quote to serve as a battlecry.

Adapt and overcome they did. – Rappler.com