China’s 2008 Olympic mascots: where are they now? BEIJING, China – Face down in the dirt with an iron post impaling his rump, Chinese Olympic mascot Huanhuan has seen better days.

Once a proud talisman of the 2008 Beijing games, the character – a traditional Chinese “good luck” doll whose fiery headdress symbolized the Olympic torch – now lies in a field outside an unfinished mall started during the pre-game construction boom.

He is one of 6 large mascot statues on the premises who have fallen down and out in the 8 years since the high of the capital’s enthusiasm for the games.

Photographed weeks before the 2016 Olympics open in Rio, the mascots are a reminder of the high costs of hosting the event.

Their derelict state reflects the challenges that China has faced in finding new uses for its Olympic investments, with many venues falling into disrepair and some construction projects left incomplete. 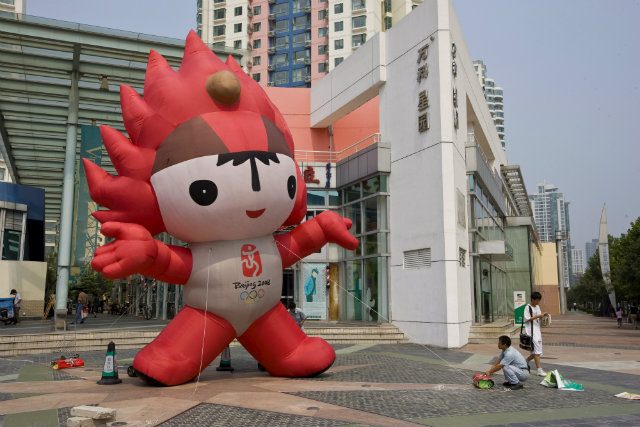 China sealed its place on the world stage as an emerging superpower in the 2008 Games, which were estimated to have cost the country around $40 billion.

Beijing’s willingness to spend big helped it win a bid last summer to host the 2022 Winter Games, beating a string of European cities that withdrew due to public concerns over costs.

The capital will be the only city in sporting history to host both summer and winter Olympics.

Today, venues such as the Bird’s Nest, which cost 3.6 billion yuan to build ($486 million at 2008 rates) and the nearby Water Cube, with its bubbled exterior and 1.3 billion-yuan price tag, remain underused. They mostly play host to curious tourists, as few events can fill their massive capacity.

When strung together, the 5 Olympic mascots’ names – Beibei, Jingjing, Huanhuan, Yingying and Nini – spell out “Beijing huanying ni”, Chinese for “Beijing welcomes you”.

Designed to represent the 5 elements of Chinese philosophy and embody some of the country’s most popular animals – Jingjing has panda-like features, while Yingying looks vaguely like a Tibetan antelope – they were once ubiquitous images across the city.

Also hiding in the weeds was a 6.5 feet rendering of Paralympic mascot Fu Niu Lele, a multi-colored cow whose name was chosen to bring good luck.

It’s not clear if Beijing is planning a Winter Olympics comeback for the formerly fab 5, but for the time being, they remain little more than a distant memory. – Rappler.com