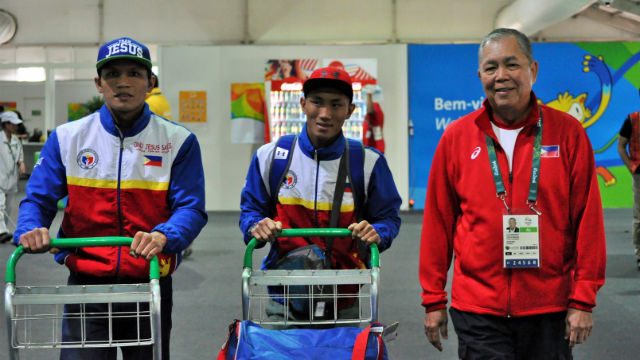 Facebook Twitter Copy URL
Copied
After training in the United States for a month, the two boxers representing the Philippines at the 2016 Olympics have arrived in Brazil

RIO DE JANEIRO, Philippines – Two Filipino boxers with equal chances of winning a medal in the Rio Olympics arrived Thursday afternoon, July 28 from a one-month training camp in the United States and declared their readiness to slug it out with the world’s finest competitors.

For both boxers, it’s their first Olympics.

“First time,” said the 22-year-old Ladon of Bago City in Negros Occidental, the birthplace of Mansueto “Onyok” Velasco, a silver medalist in the 1996 Atlanta Olympics, and brother Roel Velasco, bronze winner in 1992 in Barcelona.

Mansueto’s silver in the light flyweight class was the last medal in the Olympics for the Philippines, which is fielding 12 athletes in 7 sports and hoping to finally end the 20-year medal drought in the Summer Games.

Ladon is aware that the country of more than 100 million has long been searching for an Olympic hero. Under this circumstance, Filipinos, known as die-hard boxing and basketball fans, will settle for a medal of any color.

Ladon said he wants to win the gold.

“Go for gold tayo,” said Ladon, borrowing the slogan of the Association of Boxing Alliances in the Philippines headed by Ricky Vargas.

Ladon said it’s been his lifelong dream to make it to the Olympics, and follow the footsteps of the Velasco brothers. He said he did everything in training the past two years as he hoped that someday he will win an Olympic medal.

“Every athlete dreams of being in the Olympics,” said Ladon as he walked with some members of the Philippine delegation, including chef-de-mission Jose Romasanta, from the Pinoy quarters to the main dining hall of the Athletes Village.

“Step by step,” said Suarez, who will turn 28 on August 14. If he gets the breaks, the bible-preaching native of Sawata in Davao del Norte will be fighting in the semifinals of the 60 kg weight class on his birthday, assured of a bronze.

“I think this my best chance to win a medal in the Olympics,” he said, adding that he was very satisfied with the training he and Ladon went through in Las Vegas and Maryland.

“Boxing has always been a medal hope in the Olympics for our country,” said Romasanta, who said he could not understand why there’s only one coach to handle the two boxers in this Games that will run from August 5 to 21.

The Philippines tried to have another coach accredited for the Games but could not get what it wanted. Having a single coach to handle two boxers in a tournament of this magnitude is not the ideal situation for any team.

Romasanta is also concerned who would serve as cutman for the Filipino boxers – if needed. He joined the boxing team for lunch Thursday and offered the services of the Philippine team physican, Dr Ferdinand Brawner, as cutman.

“With no head gears, there’s the possibility for any of our boxers to suffer a cut, considering that they have to fight as many as 6 bouts to get to the finals. I don’t think our coach, being alone, can perform both duties during the fight,” said Romasanta.

(Editor’s note: AIBA, the amateur boxing world governing body, typically provides their own cutmen at ringside for tournaments, according to an ABAP official.)

Under the Philippine Incentives Act, a gold medal in the Olympics is worth P10 million in cash incentives, a silver medal P5 million and a bronze P2 million.

“It can serve as a motivation,” said Ladon, who has made some heads turn during the last Asian Championships and World Chamoionships. With his relentless style, he has drawn the attention of his top rivals.

“But you need to focus on the fights. The medal and incentives will come afterwards,” said Ladon in Filipino.

With the arrival of the two boxers, only 3 members of the Philippine team haven’t checked in here. They are hurdler Eric Cray who will fly in from Houston, marathoner Mary Joy Tabal who will come in from Japan and golfer Miguel Tabuena, still in Thailand competing in the King’s Cup.

Looking over the athletes here in Rio are Philippine Olympic Committee officials Colonel Jeff Tamayo and Julian Camacho, and administrative officers Liza Ner of the POC and Merly Ibay of the Philippine Sports Commission. – pool report by Gilbert Cordero/Rappler.com