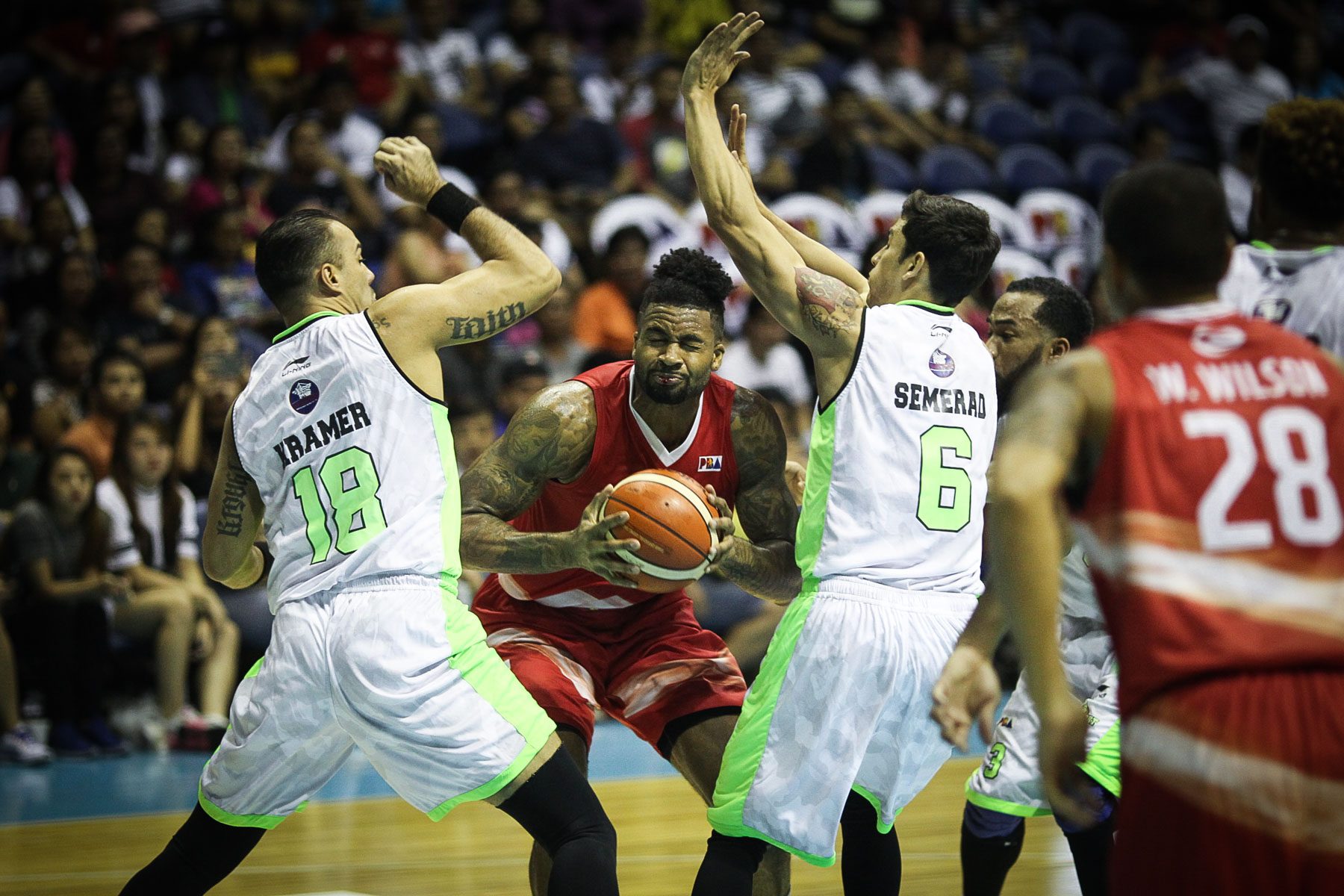 MANILA, Philippines – Eugene Phelps lay silently on a trainer’s table with a doctor on his right examining his lower lip, an assistant coach to his left holding napkins, and strangers from the media around him clicking for photos on their phones.

A tooth that was detached from his gums and inserted into his lips courtesy of an elbow from the opposing team’s import was carefully being taken out, but you couldn’t hear a single scream, nor even the slightest grunt, from the 26-year-old inside the locker room of the Phoenix Fuel Masters.

Minutes later, Phelps was back on the hardwood of the Smart-Araneta Coliseum in his PBA debut, doing what he does best: causing destruction.

“He was dominant. He was ‘El Destructor,’ which means The Destroyer. He showed today why he’s a destroyer,” Fuel Masters head coach Ariel Vanguardia said after the game.

The Los Angeles native finished the contest with a statline that instantly jumps off the page: 52 points on 18-of-30 shooting, 16 rebounds, and 6 assists, playing up to the nickname that he’s earned during professional basketball stints in Mexico, Puerto Rico and the Dominican Republic, and has followed him to the Philippines where the PBA has been put on notice.

Phoenix has moved on from its short and forgettable partnership with the underperforming Marcus Simmons and has found a gem in the 6-foot-6 standout from Long Beach State. Phelps is a throwback to the old-school big man of basketball: a rough and tough menace in the post who knows when to kick out to the open man, and doesn’t get hindered by physicality.

“It’s my mistake not to bring him earlier,” said Vanguardia, who won the first game of his PBA coaching career as Phoenix entered the winning column of the Governors’ Cup against GlobalPort. “We were eyeing him [in the] start of the season. Nothing against Marcus, but Phelps gave us another dimension – we can go to the post.

“It was my fault because I was waiting for DeAndre Liggins,” he later added. “Honestly, Marcus was on a trial basis when he was here. We were talking to Liggins and Phelps was there. When Liggins got signed by the Cavs after the [NBA] Summer League, we decided to go with Phelps.”

The game came so easy for Phelps, whose lips had to be iced every break during the second half and had to be taken to the emergency room for stitches after the game. Then again, he says it’s the third time such an incident has happened. “I know how to play through it.”

Still, his overall package is something that makes basketball purists jump off their chairs. He’s as athletic as any import in the PBA – something he displayed with a side-step and slam on the fast break – but he relies mostly on his fundamentals and basketball IQ. Phelps had 19 points before the first quarter was over, and by the end of the game had clearly out-played Batang Pier import Michael Glover, who had 27 and 17 but threw away 6 turnovers.

The biggest positive? Phoenix is so high on its new import because of how he complements the rest of the roster. The Fuel Masters shot 41% (9-of-22) from outside during the win, mostly on open looks created by the defensive demands of Phelps’ presence. For the rest of the conference, guys like Simon Enciso, Cyrus Baguio, Mick Pennisi, and more will feast on clean attempts thanks to the skillset of their reinforcement, who also presents a go-to option when the offense stagnates.

“I’m pretty sure there’s good coaches in this league, so they’re going to try to have a game plan for me, but as you can see when I got double teamed, I kicked out to my open teammates and they made threes,” said Phelps, who looked in great sync with his guys despite being in the Philippines only 4 days so far.

“I think we have tomorrow off and we probably got two days off, but when we come back we’ll practice really hard. Two, 3 hours a day. Get that team chemistry going.”

With the PBA All-Star festivities taking place next week, Phoenix doesn’t play again until August 12. That gives Phelps even more time to get better used to the Fuel Masters’ system, get his lip fixed up, get used to the bad traffic of the country, and maybe even better style his hair which he calls “pineapple.”

His 52-point coming out party on Sunday? It may just be a sign of things to come, with more offensive outbursts in the horizon as the now 1-3 Fuel Masters look to make a push for the conference playoffs.

He insists the physicality isn’t an issue for him here, going as far as to say it’s wilder in Mexico and Puerto Rico: “It’s pretty much wrestling out there. When I come down here, it’s really like nothing to me.” Against GlobalPort, when it looked like his lip was going to fall off, he showed the only way to stop him from putting the ball in the hole is probably to foul him. And he went 15-of-21 from the stripe anyway.

Vanguardia clearly made a mistake not bringing in Phelps right away, but better late than never. The Destroyer has arrived. – Rappler.com