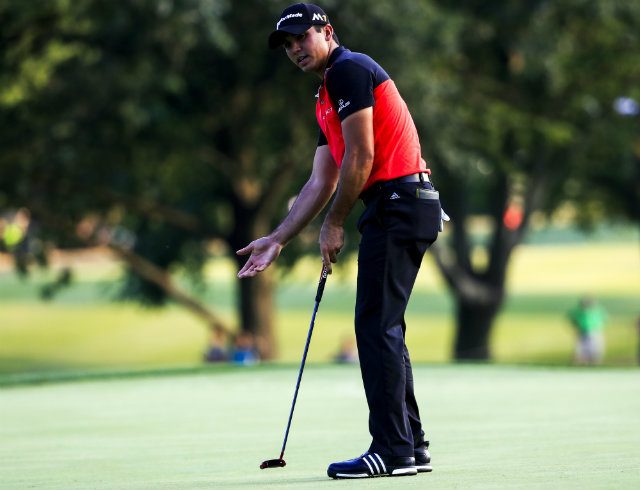 Australian star Day was still playing his third round when he holed the wonder putt to reach eight under par, level with Americans Robert Streb and Jimmy Walker atop the leaderboard at a saturated par-70 Baltusrol.

But his feat came as the fourth round began, the seldom-seen move of two simultaneous rounds being played without redrawing the pairings in a bid to finish on time Sunday.

Preferred lies – a rarely seen move in majors allowing players to lift, clean and place the ball – were adopted by the PGA of America for the final round for any “closely mown area through the green” in another bid to battle the rain and finish Sunday despite more storms in the forecast.

Day, Streb and Walker were among those girding for a 36-hole fight at the year’s final major tournament under rain and overcast skies as 11 others were within 3 shots of the lead.

“You’ve got to be a little bit aggressive,” Day said. “It should yield a few more birdies, but also stay patient with regards to the weather, just keep yourself mentally intact.”

British Open winner Henrik Stenson of Sweden and Argentina’s Emiliano Grillo were on seven-under in the third round while South African Brendan Grace birdied 4 of his last 6 holes to fire a 66 and grab the 54-hole clubhouse lead at 6-under 204.

“It’s going to be a long day,” Stenson said. “I don’t know if it’s a benefit or not, not having started. But it’s the same for everyone in the last groups. It will be a long day. It’s normally the mind that gives up before the body.”

Streb, who missed the cut at the year’s first 3 majors, has not managed a top-10 finish in a US PGA event since his share of 10th at last year’s PGA Championship – 27 events of mounting frustration that could end with him hoisting the Wanamaker Trophy.

“I’m guessing we’re going to be here ’til at least Monday, hopefully not Tuesday,” Streb said. “But we’ll see how it goes. Still got to play 36 holes, see how many we get in.”

In all, 37 of 86 players were able to finish the third round Saturday with American Kevin Kisner completing a 65 to stand 5-under.

“There’s going to be people that play (only) 18 holes like Kevin Kisner and he’s going to have a little bit more of an advantage,” Grillo said. – Rappler.com