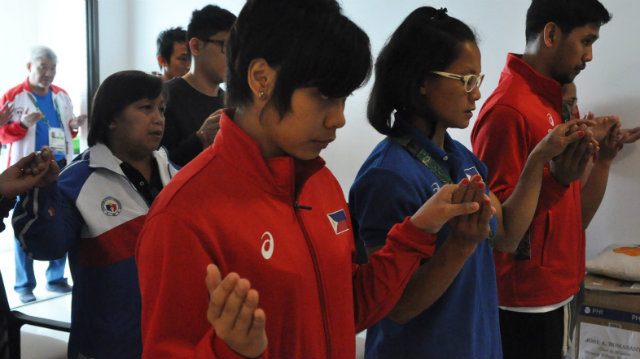 Facebook Twitter Copy URL
Copied
Marestella Torres-Sunang, the most senior member of the 12-strong Philippine team, is leaving no stone unturned as she aims for a strong performance

RIO DE JANEIRO, Brazil – Long-jumper Marestella Torres-Sunang wants to make sure that her third and last Olympics will be the most memorable.

Sunang is 35 years old and is now a mother of a two-year-old son.

But she said this did not stop her from making it to her third straight Olympics since 2008 in Beijing and in 2012 in London.

In both her previous tries, the 2009 Asian Championships gold medalist and 4-time champion in the SEA Games fell short of expectations.

This time, she said Sunday here in Rio de Janeiro, should be different.

“Sana maka-perform ako ng maganda (I hope to perform well),” said Sunang, who drew all the support from track and field chief Popoy Juico in her long road to Rio.

“She really wanted this and I saw how hard she worked to get to her third Olympics. She deserves to be there,” said Juico from Manila.

Sunang, the most senior member of the 12-strong Philippine team to this Rio Games, is leaving no stone unturned.

With a new personal best of 6.72 meters, Sunang said she has a chance of making it to the finals of the Olympics for the first time.

“Ang target ko talaga is malampasan ang personal best ko (I want to surpass my personal best). Para may chance umabot sa finals (Then there’s a chance to get to the finals),” she said.

Torres knows who’s around when the competition begins, and they include competitors who can do 7s on any given day.

“As long as ma-match or malampasan ko personal best ko (I can match or surpass my personal best), I have a chance to reach the finals,” she insisted.

“That will be the best finish in the Olympics. Ito na ang last ko (This is my last),” she said. – Rappler.com