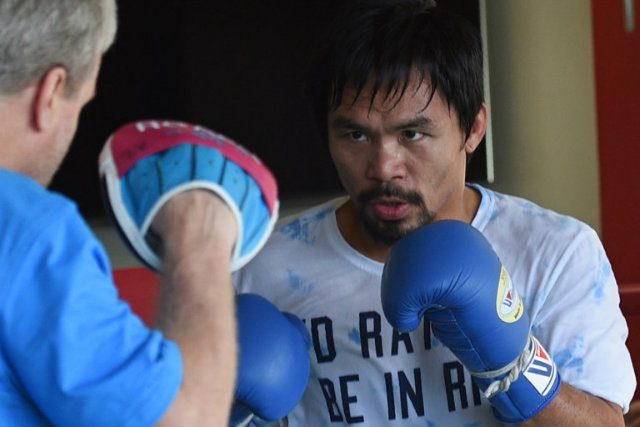 MANILA, Philippines – Manny Pacquiao now has an opponent for his ring return on November 5 as he will reportedly face WBO welterweight titleholder Jessie Vargas in a 12-round encounter.

Pacquiao’s decision to square off with Vargas was confirmed by adviser Michael Koncz in an interview with Los Angeles Times.

The 37-year-old southpaw from General Santos City originally announced his retirement from boxing after a unanimous decision victory over Timothy Bradley Jr in their rubber match last April.

Pacquiao then won a senatorial seat in the Philippine elections this past May, but he reversed his decision to retire and stressed that he is willing to compete again.

Boxing’s only 8-division world champion admitted that his love for the sport has not faded since hanging up his 8-ounce gloves.

“Retirement doesn’t suit Manny right now,” Koncz said. “Boxing is in his blood. When he trains, it’s like a pressure-release valve. You can see a dramatic difference in his mood. He’s happy. It’s amazing what training and fighting does for him.”

According to Koncz, Top Rank chief Bob Arum is looking to stage the bout in Las Vegas or Dubai. Arum tweeted last week that he was talking to a group from the Middle East that wants to host Pacquiao’s comeback match.

Koncz confided that he will accompany Arum in the Philippines on August 10 to discuss the next fight with Pacquiao.

Meanwhile, Vargas told Las Vegas-Review Journal that his manager Cameron Dunkin, has been working on a contract for him to fight Pacquiao on November 5 at the Thomas & Mack Center in Las Vegas.

Pacquiao is no stranger to the Thomas & Mack Center as he fought twice at the 18,000-capacity arena, winning his last two matches against Erik Morales in January and November of 2006.

We know we have a high possibility of a fight between him and I, and it’s being confirmed soon. We’re looking forward to it, reviewing the contract and signing it,” Vargas stated.

“Everything is pointing in the right direction that we will have a fight confirmed between Manny Pacquiao and Jessie Vargas,” Vargas added.

Vargas holds a record of 27-1 with 10 KOs and became a two-division world champion this past March by claiming the vacant WBO welterweight championship at the expense of Sadam Ali.

Aside from Vargas, WBO junior welterweight champion Terence Crawford was also considered as one of the possible options to dance with Pacquiao.

However, Pacquiao’s head trainer Freddie Roach was not a big fan of the matchup, saying he would like a full training camp for his valued pupil.

Although Pacquiao ensured that his preparations for his comeback will not interfere his duty as senator, it will require changes in his typical preparations.

Roach admitted that Pacquiao should be in top shape to topple an impressive two-fisted fighter like Crawford.

The 7-time BWAA “Trainer of the Year” awardee guaranteed that an in-ring meeting between Pacquiao and Crawford will happen in the future. – Rappler.com