5 women to watch at the Rio Olympics 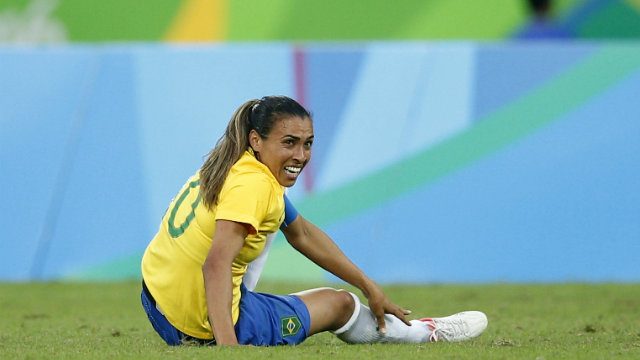 Facebook Twitter Copy URL
Copied
The Olympics have come a long way since the 1896 Games, where not a single female competed

RIO DE JANEIRO, Brazil – The Olympics has come a long way since 1896, when not a single woman competed at the first modern edition in Athens. This year, the United States will send more women than men (292 of 555 total athletes are women) with a number of competitors – like tennis star Serena Williams – likely to garner much attention.

Aside from that international sports star, take a look at 5 women whose feats are likely to grab notice at the Rio Olympics.

Marta Vieira da Silva, known as just Marta, is a superstar of women’s football. The 30-year-old, dubbed as “Pele in skirts,” wants to finally prove that second is not good enough for the Brazilian women long time in the shadows of their star-studded men’s team, who are holders of five World Cup titles. Winner of the FIFA’s women’s world player on the year five times, she helped Brazil to silver in Athens and Beijing, but despite her international honours has never won a major title with Brazil. As fellow Olympian Neymar earns millions from the sport, Marta, who grew up playing football in the streets with boys, has often struggled to make a living from the sport with seven of the eight teams she has played for going bankrupt. “Brazil is specially known as the country of soccer, but men’s soccer. (The Olympics) is an opportunity to change that,” Marta said.

Unbeaten since women’s wrestling was included to the Olympics in Athens in 2004, Yoshida, 33, is the most decorated athlete in freestyle wrestling, with three consecutive Olympic gold medals and 13 world championship titles. The 33-year-old will be bidding for a fourth consecutive Olympic title in the 55kg class. She carried the Olympic flag in London and in Rio will be the first woman to captain the Japanese team. The greatest female wrestler of all time was introduced to the sport at a very early age by her father, the late Eikatsu Yoshida, an Olympic freestyle champion and national team coach. She has had unprecedented success on the international scene in the 55kg and then the 53kg categories. “I am not settling for 3 golds in a row. I now want to try for a fourth,” she warned.

Semenya is a South African runner set to take centre stage in athletics despite being pursued by gender questions. She is favourite to win gold in the 800 meters in Rio and possibly break the track’s longest-standing world record. But her presence is not without controversy. Her case triggered a debate in sport over hyperandrogenism, a condition involving overproduction of male sex hormones. After winning gold at the 2009 World Championships, Semenya was forced to undergo medical tests and barred from the track for nearly a year, before returning to win silver at the 2011 worlds and 2012 London Olympics. Born in the poor northern village of Ga-Masehlong, Semenya married her long-time partner Violet Raseboya in December last year. The 25-year-old is in the best form of her life, and confidently brushing off the past track disputes said: “I’ve been through a lot. Now I’m back with a bang… The main target is to go to Rio and win a gold medal.” Yusra Mardini swam for her life when she fled his native Syria less than a year ago. In Rio the 18-year-old will be swimming for a medal in the 100 meters butterfly and 100m freestyle as along with Rami Anis she will represent the refugee team in Olympic swimming. The Germany-based athlete is competing just 11 months after she plunged into the freezing Aegean Sea to help push a sinking dinghy, overcrowded with 30 migrants, to safety. For three hours, she, her sister Sarah and another woman took turns to push the boat to safety. Life took her to Germany, and then Rio and on August 5 it will be “pride, happiness and butterflies in the stomach” she will carry the flag of the first team of IOC refugees, accompanied by Anis, and eight other athletes without a country. “We are human beings who lost our home and we are trying to rebuild our lives. Many things have happened, but at some point you have to move on,” said Mardini.

Olympic heptathlon champion Jessica Ennis-Hill has history in her sights as she will attempt to become just the third athlete to win Olympic gold, have a baby and then return to successfully defend their crown. If the 30-year-old triumphs in the heptathlon she will also be the first British female athlete ever to retain an Olympic title. After giving birth to son Reggie, Ennis-Hill won the world title in Beijing and has battled back from an Achilles injury to head to Brazil as one of the favourites for gold. “It feels completely different this year. I don’t feel that stress and pressure I had in 2012 and last year as well when I decided to go to Beijing,” she said. “I kind of feel I’ve come back from injuries and having my son and got back to the top of my sport. I have Reggie, I’m a mum and my priorities are totally different now.” – Rappler.com