Facebook Twitter Copy URL
Copied
(3rd UPDATE) The 23-year-old Lacuna finished 6th in the second heat of 7 swimmers with a time of 4:01.70, with a final ranking of 46th out of 50

MANILA, Philippines (3rd UPDATE) – Jessie Lacuna bowed out of contention in the 2016 Summer Olympics after he finished second to last in his heat of the men’s 400m freestyle competition on Saturday, August 6 (Sunday, August 7 in Manila) in Rio de Janeiro, Brazil.

Lacuna, competing in his second Olympics, initially was in fourth place before later on falling behind to 5th then 6th place in the final 200m. 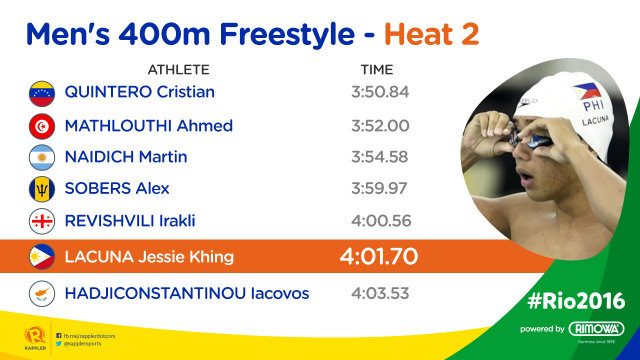 Dwyer is very closely followed by Australia’s Mack Horton, registering 3:43.84, while Italy’s Gabriele Detti is in third after clocking in at 3:43.95.

Another Australian David Mckeon also moves on to the final after finishing with a time of 3:44.68 in 5th place.

Earlier, table tennis bet Ian Lariba bowed out of the Games when she was swept by Xing Han of Congo.

The Philippines now has only 11 Filipino Olympians left to vie for the nation’s first Olympic medal in 20 years. – Rappler.com