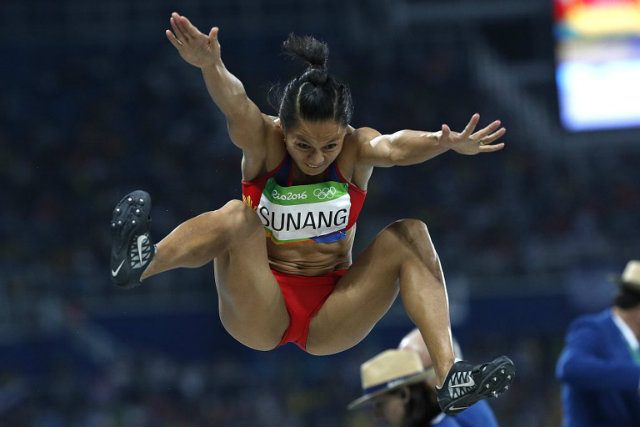 Facebook Twitter Copy URL
Copied
For the third straight Olympics, Marestella Torres-Sunang fails to make it to the finals after registering a longest attempt of 6.22m

The San Jose, Negros Oriental native achieved that mark in her first attempt and followed it up with a 6.10m leap. Needing a significant increase to match the automatic mark for the next round of 6.75m, Torres could only manage 6.15m in her third attempt. She finished 14th out of 19th in Group B and 28th out 38 overall.

Torres’ last few months had been turbulent after she originally was entered into the 2016 Games through the universality clause after hurdler Eric Cray qualified.

Her automatic ticket was canceled when Mary Joy Tabal qualified in the women’s marathon event, but the 35-year-old regained her spot after exceeding the qualifying of 6.70m, setting a new Philippine record of 6.72m at the Kazakhstan Open in July.

The 2016 Games are Torres’ first Olympiad since becoming a mother to a son, now aged 2.

The only Filipino athlete left to compete is taekwondo jin Kirstie Alora, who takes the mat Saturday for the 67kg Round of 16. Hurdler Eric Cray competed in the men’s 400m hurdles as Torres was in action but bowed out in the semifinals after finishing 7th in his heat. – Rappler.com