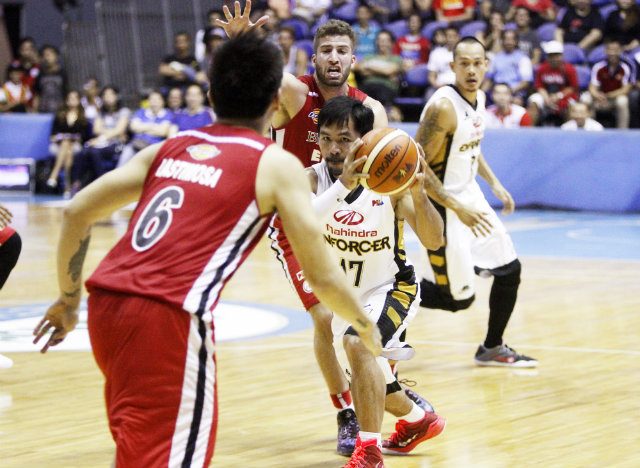 MANILA, Philippines (UPDATED) – Manny Pacquiao saw action for the second time in the 2016 PBA Governors’ Cup and took advantage of his over 6 minutes of playing time Sunday, August 21.

The Mahindra Enforcer playing coach came in towards the end of the second quarter and soon after scored his first point of the game on a split from the free throw line.

Manny Pacquiao's lone point in this game, off a free throw, in slow motion #PBA2016 pic.twitter.com/rPDjubPaaO

The newly elected Senator, who drew cheers from the crowd each time he held the ball, then upped his point total after burying his first career 3-pointer from the right wing with just 24 seconds to go before the break.

Manny Pacquiao buries this 3-pointer. He surpasses his career total w/ 4 points. Here's a look at his 3 in slow-mo pic.twitter.com/9Rz1f1bjxS

Pacquiao effectively surpassed his previous career total of 3 points with 4 points in this game against the Blackwater Elite. He returned to the game in the final two minutes and tracked down an additional rebound.

Mahindra, once the league leader this conference with a perfect 4-0 record, successfully recover from back-to-back losses with a 97-88 victory over Blackwater. – Rappler.com