Why Carmona will be the next PH football Mecca 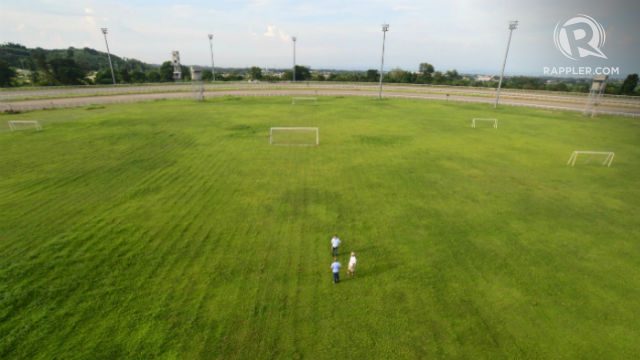 MANILA, Philippines – “This has really been a dream for all of us,” says Eduardo Ramirez de Arellano, the Vice President for Marketing of the Manila Jockey Club. He intones those words as we stand on the artificial turf field being laid out a stone’s throw from their race track.

Ramirez de Arellano played football for La Salle Greenhills as a left-sided attacker. When he says “us,” he is referring to others in MJC, like Director Peewee Reyno and two members of his marketing team, Marketing Officer for Football Operations and Special Events Mikki Cardenas and Marketing Department Head Nathan Mazo.

But what interest would a horse racing track have in football? History plays a role. Once upon a time, when the San Lazaro racetrack was, well, in San Lazaro, Manila, football was played inside the track. Legend has it that proto-Azkal Paulino Alcantara unleashed his legendary net-busting right foot on the turf there many times.

The land on the original racetrack in Manila is is now being developed for tourism and entertainment through partnerships with property developers, and in 2003 the MJC decamped to its current site in Carmona, Cavite. The whole area is known as the San Lazaro Leisure and Business Park. There’s a track, a sleek grandstand, and soon, football as well.

The MJC has partnered with the Philippine Football Federation to be the site of their National Football Center. MJC has set aside land for a new PFF office and leased out land outside the track for a football field. The field is currently being built using funds from FIFA’s Goal III project. No less than then-FIFA chief Sepp Blatter was on hand in November 2014 for the groundbreaking. After some delays, the pitch is nearing completion. The field is regulation sized, meaning it will be 105 meters long and 68 meters wide. The synthetic grass is from ACT Global, a FIFA preferred producer of turf based in Austin, Texas. The monofilament blades of grass will be 60mm long. Silica sand and rubber infill will support the grass.

According to Lex Van Der Greft, the Dutch installer on hand, there are layers of geotextile, soil, and crushed stone under the field to help it drain properly. There are large drains on either side of the field, which is crowned, or higher in the middle than the sides to facilitate drainage.

Van Der Greft says rubber infill was chosen over organic infill because of its greater durability.

Like all Goal Project pitches, the field is guaranteed to pass FIFA’s 2 star accreditation, which means it can host the final stages of major international tournaments.

There is space around the pitch for a stadium, and on Manila Jockey Club’s website there is even an artist’s impression of the original plan and surrounding developments. But Ramirez de Arellano says that they will first create gentle grass slopes around the pitch to serve as natural bleachers. Stadium plans can follow, and the club is also open to naming rights and joint venture partnerships. A fence and lighting are in the pipeline for the immediate future.

There are also plans to put other, smaller pitches around the main field, as well as dormitories to house teams for training camps or matches.

But this isn’t the only spot for football on the premises. There is 9 hectares of land within the racetrack itself. Part of it is taken up by a natural lagoon, but the northeast bit is open grassland.

Ramirez de Arellano says that PFF will use the land for one regulation-sized grass pitch and the MJC will match that with another one beside it. The grass pitches will make an ideal partner for the artificial pitch. Teams can now train on whatever surface their upcoming competition will be played on. According to Ramirez de Arellano the surface will be leveled soon by professional natural turf contractors.

In case you’re wondering, it might even be possible, with high enough fences, to have football and horse races going on at the same time. The club is also mulling an underground tunnel from the outside to the inside of the track.

You can see the whole complex on Google maps here.

The club is even open to hosting a team in the upcoming Philippines Football League, although there are guidelines about stadia that must be followed. It’s not clear which of the two fields would be more appropriate for this use.

The MJC has already hosted 3 youth football festivals on this turf, with the most recent one, called the Copa San Lazaro, taking place last June. Ramirez de Arellano says the track floodlights can be focused onto the field, making night games possible.

As we survey the grass field in the track, some of the kids who competed in that last competition are playing a pick up game on a nearby strip of grass just outside the track. They are using small portable goals that I’m told are for hockey. The kids appear to be having a swell time.

Cardenas, a former UP Diliman varsity player, and Mazo regularly train the kids, whose ranks have swollen to about 70 of late. Hailing from nearby barangays, they seem to have fallen hard for football. One day they could form the nucleus of a local team.

In Carmona, Cavite, the Sport of Kings and the Beautiful Game are flourishing side-by-side.