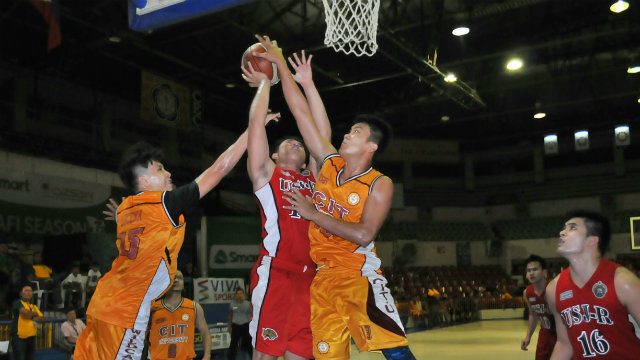 Facebook Twitter Copy URL
Copied
The Jaguars will play the UV Green Lancers in the semis, while SWU-Phinma faces the USC Warriors

After wasting the first of their twice-to-beat advantage yesterday, the USJ-R Jaguars made sure that they wrapped up the remaining semifinals ticket and get a chance to improve their third place finish last year.

Ralph Jude “RJ” Dinolan finished with a career-high 31 points, 6 rebounds and 5 steals to tow the Jaguars to the final 4 despite being the target of tight defense by the Wildcats.

The Wildcats, on the other hand, were topscored by John Anthony Lucena with 12 points and 7 rebounds.

The USJ-R Jaguars came armed and determined to advance to the semifinals, posting their highest advantage at 22 points just as the last two minutes of the ballgame was announced.

The CIT-U Wildcats came close twice in the first half but couldn’t sustain their play in the second half.

The USJ-R Jaguars will join the Southwestern University (SWU)-Phinma Cobras, who enjoyed an automatic entry to the semifinals with a 12-0 win-loss record after sweeping their elimination games, and the University of the Visayas (UV) Green Lancers and the defending champion University of San Carlos (USC) Warriors who both advanced to the final 4 by dismissing their respective quarterfinal opponents.

Being the second seed, the USJ-R Jaguars will be facing last year’s runner-up UV Green Lancers, seeded third this year, while SWU-Phinma will face the fourth seed USC Warriors.

Both the High School and College divisions will begin the semifinals tomorrow Saturday, October 8.

Both divisions will follow a single round robin format with the top 2 teams advancing to the finals and the No. 3 and 4 teams to fight for the third place.

In the High School division, the fight for third place will be a knockout game while the Finals will be a Best of 3 Series.