RAW Deal: No mercy at No Mercy 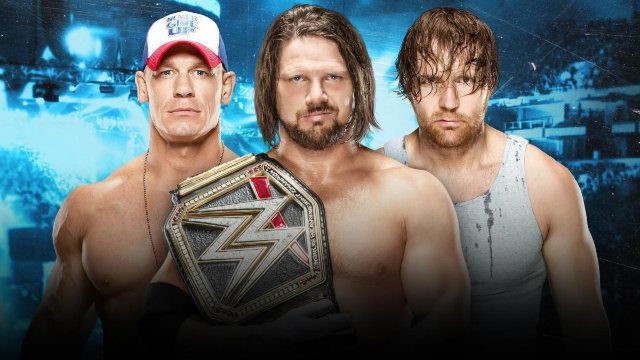 Where RAW pay-per-views (and the brand itself) have become chores to even wake up for and sit through, SmackDown has—like I’ve said over and over again—become must-see TV. If you must follow only one brand of the WWE, make it Blue Wrestling. It may not have the big up-and-coming stars you always want to see, but at the rate they’re going, they’ll be making the stars you’ll want to watch soon.

Up on the main event docket is AJ Styles vs John Cena vs Dean Ambrose for the WWE Championship, a match fans originally frowned upon for the seemingly-nonsensical addition of Cena, who technically hasn’t done jack to deserve a title shot. (Styles did beat him up last time.) But that’s the thing about SmackDown’s storytelling right now: when they really want it, they’ll go all in on it and give you a reason to care about that match. For this one, it’s reestablishing the real John Cena and the champion he really is, beyond Ambrose’s wild caricatures of him.

The last SmackDown-exclusive PPV, Backlash, ran only a little over two hours and a half, which we all appreciated for its brevity; No Mercy (set for Sunday, October 9 US time) might go a little longer, but expect the matches to still have a long running time.

Jack Swagger vs Baron Corbin in a kickoff match

Other than important anchors in the main event, the most important thing a brand needs to have is a fleshed-out undercard. This might seem like a throwaway stroy to you, but their quick encounter in this week’s episode of SmackDown proved that they have good enough chemistry to work together well, and that getting the minimum iota of creative effort can go a long way.

Swagger got a slightly-questionable win that, at least, didn’t make him look weak heading into the show, but you know Corbin’s gonna want to pound his head in this time around.

I’m happy that Curt Hawkins is back, but I’m not so sure how to feel about his years-late Chuck Norris gimmick. He’s obviously winning, though.

When you’ve got a women’s division feud other than the Women’s Championship match, you know you’ve got some okay depth in the card. Carmella isn’t the best heel in the division right now and this feud should’ve gone to Natalya, but she needs this. The question now is whether they’re going to prolong this feud, as a Bella win here would stop whatever momentum Carmella was building up this entire time. We’ve gotten to the point now where Bella is a relative veteran gatekeeper to the division. Let’s see what happens.

The back-and-forth between the two has been both parts head-scratching and entertaining, and with all the many times Wyatt has been punked by the Viper, you can tell that they’re really, really, really setting him up for the win at No Mercy. (Hopefully.) Please, let’s give Wyatt the win already. One more good thing about this new era SmackDown is that so far, their track record of letting the right people win has been good. But then, that’s only after one PPV, so it’s tough to reassuringly judge it.

Okay, so the outcome of this match depends on what you believe. On one hand, Ziggler has been rumored to be losing the match in order to transition into a backstage producer role with the company. He’s 36 and isn’t really a spring chicken, so it’s sort of believable. On the other hand, putting one’s career on the line virtually guarantees that the other guy, who has less at stake, will be losing, so to cast bigger doubt on the guy with his career on the line will make the match less predictable.

I suppose the right answer to this is by asking ourselves this question: can we still get something out of Dolph Ziggler? And I believe the answer is yes. In a brand that’s still trying to compete with RAW for attention, no matter how great its storytelling is, a redemption angle for Ziggler would bring in the views.

As great as Slyno’s big win at Backlash was, I’m totally okay with them losing the titles to the rightful tag champs now. The Backlash win was a stopgap solution that they needed to pull because of the pressure of the Heath Slater story, but now that he’s validated with a WWE contract, they can have Rhyno turn on him (or whatever they’ve got in mind) so we can move on with something else to cheer him for. The Usos need to get this so we can also proceed with the American Alpha feud. (Poor Alpha; they’ve sort of been sitting on the sidelines thanks to Slater and Rhyno.)

Alexa Bliss has emerged as one of the best young heels in the company regardless of gender, that’s for sure. Although a heel champion is better for the stories overall, it’s not yet time for her to ascend the throne. We’ll get something fun, at least.

I’ve alraedy discussed this up top, but let me just say this real quick: AJ Styles is the best thing SmackDown has going for it right now as a whole. He’s a believeable champion, he’s a champion people wanna see, and he absolutely works as the curmudgeonly heel veteran right now. It forces everyone to take a role that is beneficial for them (Ambrose works better in the chase, for example), and he’s a good anchor for stories. This reign is going to be a long one, for sure.

Do you listen to podcasts? Would you want to listen to a local podcast about pro wrestling? If the answers to those questions – especially that last one – are yes, then you should check out the cleverly-named Smark Gilas-Pilipinas Podcast, featuring Mellow 94.7 DJ and PWR General Manager Stan Sy, wrestling writer and Wrestling God Romeo Moran, and all-around multimedia person and former voice of PWR Raf Camus! This week, the boys predict No Mercy and have some PWR stars guest right before this year’s  Renaiassance! – Rappler.com