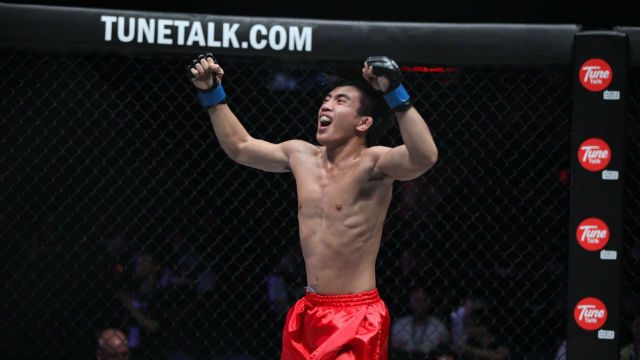 Facebook Twitter Copy URL
Copied
'It’s not a defeat. I think of it as a lesson,' says Filipino fighter Joshua Pacio after losing to ONE Championship strawweight champ Yoshitaka Naito

YANGON, Myanmar – Despite suffering a painful defeat at the hands of Japanese veteran Yoshitaka Naito, Filipino prospect Joshua Pacio is still gazing at the bright side of his current situation.

The 20-year-old Baguio City native failed in his bid to become the youngest Filipino fighter to capture a world title in mixed martial arts (MMA) by yielding to Naito in the main event of ONE Championship’s “State of Warriors” card on Friday, October 7.

Naito pulled off a come-from-behind victory by submitting Pacio with a rear-naked choke in the third round to keep the ONE Championship strawweight belt around his waist.

Winning the gold-plated strap was within reach of Pacio as the 5-foot-4 Team Lakay standout effortlessly stuffed all 5 takedown attempts of Naito in the first round and peppered his Japanese foe with lunging right hands and spinning back kicks.

Although Naito was able to take him down to the mat in the second period, Pacio was able to inflict damage while defending on his back.

However, it only took one mistake to crush Pacio’s championship aspirations as Naito secured a rear-naked choke that ended the Filipino’s undefeated streak.

Pacio sees his loss to Naito as an important lesson because he considers it as an opportunity to patch the loopholes in his overall MMA game.

“It’s not a defeat. I think of it as a lesson. It will serve as an inspiration to push myself to the limit. I will triple my time in training,” he told Rappler.

Pacio stressed that he has no plans to take some time off to reassess his future because he want to go back in training on Monday.

“This will not stop me. I have to go back to the drawing board. By Monday, I will be in the gym to train,” he stated.

With Pacio having every answer to Naito’s attacks in the first two rounds, the young Igorot warrior admitted that the outcome of the strawweight championship clash has not sunk it yet.

“I already felt it [that I could walk out as champion]. But one mistake took that moment away from me. It’s tough,” he shared.

Pacio asserted that he looks to get back inside the ONE Championship cage as soon as possible to redeem himself from the submission loss to Naito.

“I’m still in high spirits. I will be training on Monday. I want to fight as soon as possible. Winning and fighting again will motivate me,” he said. – Rappler.com