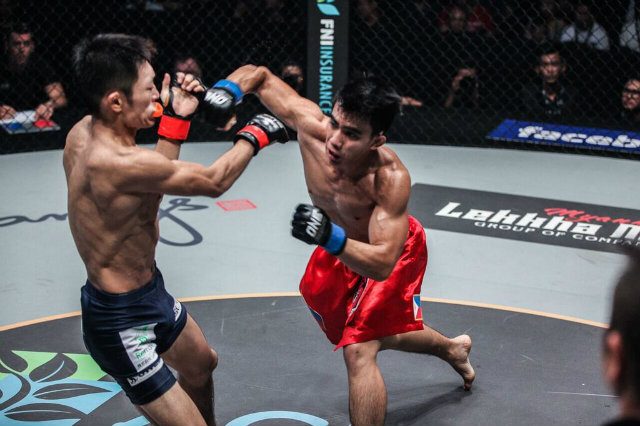 Facebook Twitter Copy URL
Copied
Pacio might have fallen short in the first world title fight of his budding career, but Sangiao is pleased with his performance

SINGAPORE – Although Joshua Pacio failed to bring home the ONE Championship strawweight title, Team Lakay head coach Mark Sangiao is satisfied with the performance that the highly-touted Filipino prospect has shown against Japanese veteran Yoshitaka Naito.

The 20-year-old Baguio City native was close to becoming the youngest Filipino fighter to capture a world title in mixed martial arts (MMA) as he smoothly dictated the pace of the bout’s first two rounds.

The gold-plated strap appeared to be within Pacio’s reach as he smoothly stuffed all 5 takedown attempts of Naito in the first round and was clearly getting the best out of the exchanges in the stand-up department.

Naito was able to put the action on the mat with a successful single-leg takedown in second frame, but Pacio remained active by inflicting damage while defending on his back.

However, it only took one mistake to crush Pacio’s championship aspirations in the third round as Naito secured a rear-naked choke that ended the Filipino’s undefeated streak.

Pacio might have fallen short in the first world title fight of his budding career, but Sangiao is pleased with the valued pupil’s championship-worthy performance.

“I’m satisfied with his performance. In the exchanges, he got the better of it. He denied all of Naito’s takedown attempts. He almost became a champion, but it only took one mistake. It’s part of the game,” Sangiao told Rappler.

Sangiao admitted that Pacio had slowed down in the third round that made him vulnerable to Naito’s spurt to fasten the fight-ending submission.

“Joshua started to slow down in the third round. Naito capitalized on that loophole. It’s a fight that can serve as a lesson for Joshua,” he stated.

The longtime Team Lakay mentor lauded Naito’s championship experience as it played a pivotal aspect in pulling off a come-from-behind victory over Pacio.

“He is a champion for a reason. He showed it against Joshua. It’s not mere luck that he won. His experience played a big part of it. So congratulations,” he said.

Sangiao still believes that Pacio has a bright future ahead of him and added that the painful submission defeat to Naito will serve as a big lesson for the 5-foot-4 Team Lakay standout.

“Although it ended on a painful note, there’s something that Joshua can pick up as a lesson to improve his skills. Joshua is not down and out after falling short in his first title fight. I’m pretty sure that he will bounce back as a better fighter,” he shared. – Rappler.com