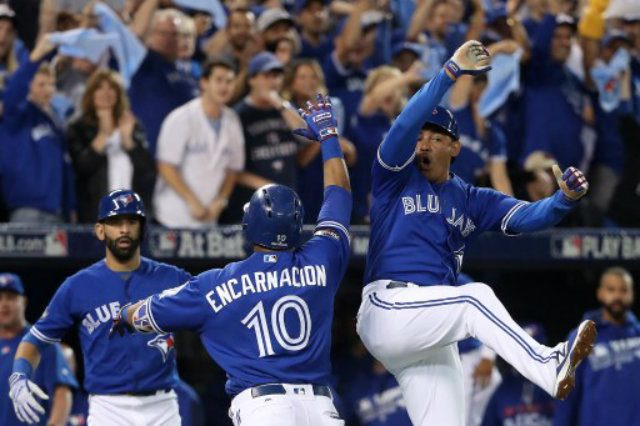 LOS ANGELES, USA – Josh Donaldson made a mad dash from second base to score the winning run in extra innings as the Toronto Blue Jays advanced to their second straight American League Championship Series on Sunday, October 9 (Monday Manila time).

The Blue Jays completed their first series sweep in franchise history with a 7-6 victory over Texas on a winning run that was set up by an error from Rangers second baseman Rougned Odor in the bottom of the 10th.

“It was a back and forth battle. We were able to get the last one.”

With the score tied 6-6 with one out and runners on first and second, Canadian Russell Martin started the play with a ground ball to shortstop Elvis Andrus. The ball was flipped to Odor and the Rangers appeared to have a routine double play in the making but Odor bungled the throw to first base.

That allowed Donaldson to charge home from second. His head-first slide beat the throw from Rangers Mitch Moreland.

Donaldson reached second earlier in the inning with a line drive to centre field.

“I tried to get a pitch, and I was able to take advantage of a pitch that stayed over plate,” Donaldson said.

“That is the best ground ball to short I have ever hit,” Martin said.

“We are built to be resilient. We’ve been through a lot this year. We didn’t let them get to us. It wasn’t pretty, but we got it done.”

Odor and Andrus homered for the Rangers.

In the other playoff game played Sunday, Jose Lobaton belted a three-run homer and Daniel Murphy drove in two runs as the Washington Nationals beat the Los Angeles Dodgers 5-2 to knot their series at one game apiece.

Lobaton went deep on a curveball from Dodgers starting pitcher Rich Hill in the fourth inning to give the Nationals a 3-2 lead.

He smacked the two-out shot into the Dodgers’s bullpen in left field after Murphy drew a leadoff walk and Danny Espinosa was hit by a pitch with two outs.

“I think I hit it really good,” Lobaton said. “When it went out it was like, ‘That is pretty cool.’ I think everyone is going to feel good (going to Los Angeles). That is what we wanted.”

Lobaton, starting because regular catcher Wilson Ramos is out for the rest of the season with a torn knee ligament, last hit a post-season home run in 2013, when he was playing for Tampa Bay.

Winning pitcher Blake Treinen retired all four batters he faced, lefty Oliver Perez retired both batters he saw in the eighth and closer Mark Melancon pitched the ninth for the save.

The contest was postponed from Saturday, so the teams will have a quick turnaround to game three in Los Angeles on Monday.

The winners of the series will face either the Chicago Cubs or San Francisco Giants for a World Series berth. The Cubs take a 2-0 series lead into game three in San Francisco on Monday.

There was another rain delay on Sunday, as the American League game between the Cleveland Indians and Red Sox in Boston was washed out.

That means the Indians, up 2-0, have to wait until Monday to try to close out that series. – Rappler.com