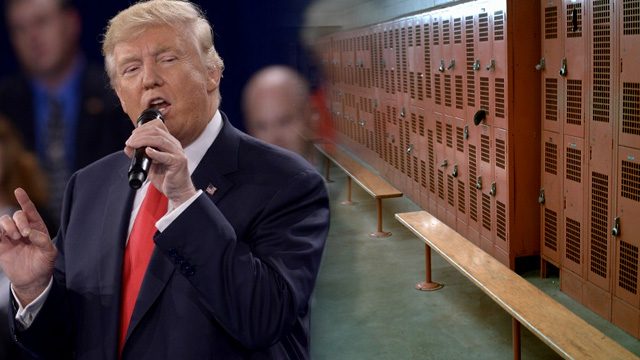 Several American professional athletes slammed Donald Trump on Sunday after the Republican presidential nominee tried to dismiss his sexual comments about women by describing them as “locker-room talk.”

Speaking during the second presidential debate with Democratic candidate Hillary Clinton, Trump used the locker room reference numerous times when questioned about the release of a leaked tape on Friday that captured him saying degrading things about women.

The 70-year-old US billionaire dismissed them as “just words” and “locker room talk.”

“I haven’t heard that one in any locker rooms,” NBA Portland Trail Blazers player CJ McCollum wrote on Twitter.

Trump went on to say that the video from 2005 “doesn’t represent who he is.”

Trump acknowledged he was “embarrassed” about his comments. “But I have tremendous respect for women.”

Asked directly if he had done the things he mentioned in the video, Trump said: “No, I have not.”

Locker room talk? Not on your life- this was Trump exactly how he is. Authentic. Obnoxious. Criminal. Etc….

Tennis legend Martina Navratilova, who won 18 grand slam singles titles between 1978 and 1990, said the vulgar comments are simply a reflection of Trump’s true self.

“Locker room talk? Not on your life- this was Trump exactly how he is. Authentic. Obnoxious. Criminal. Etc….,” Navratilova said on Twitter.

“Please stop saying “locker room talk”. It’s not normal. And even if it were normal. It’s not right,” wrote Tamme who plays for the Atlanta Falcons. – Rappler.com