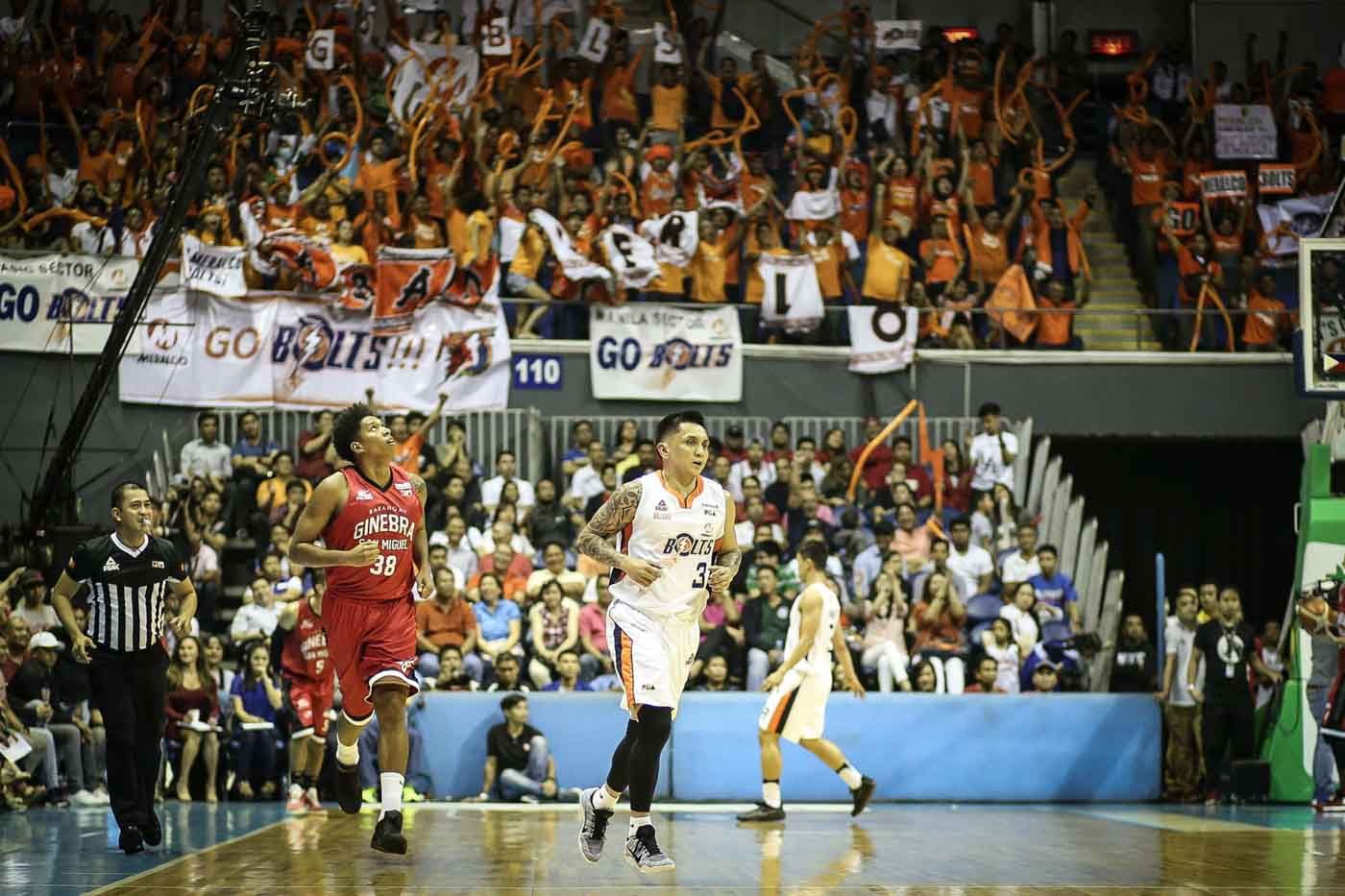 MANILA, Philippines (UPDATED) – Rookie Chris Newsome shone bright and the Meralco Bolts outplayed Barangay Ginebra late in the second half once again for the 107-103 victory in Game 3 of the 2016 PBA Governors’ Cup Finals on Wednesday, October 12 at the Smart Araneta Coliseum.

Newsome finished just just a hair shy of tying his career-high with 22 points and 7 assists as the Bolts went ahead 2-1 in the best-of-7 series after another thrilling squeaker.

“Well it seemed to be a game that neither team wanted to lose. Both teams fought right up to the very end,” said head coach Norman Black. “We really wanted to take Game 3 because we really felt that would give us an advantage going further into the series.”

Meralco brushed off Ginebra in the final 3 minutes with clutch 3-point shots from veterans Jimmy Alapag and Reynel Hugnatan, who made back-to-back treys after 4 misses for a 98-92 lead with two minutes to go.

Newsome hit another big shot after that for the 8-point lead but as Ginebra hung around with two-point responses, Hugnatan was again left open on the left corner for a triple and the 105-98 lead with 42.2 ticks left.

The Gin Kings rallied in the final 30 seconds with import Justin Brownlee hitting a big triple from beyond 30 feet to make it just a two-point deficit with 11.2 seconds remaining. But the fan favorites ran out of time and the Bolts escaped unscathed.

“That was an amazing shot by Brownlee at the end game, that 30-foot shot he threw up there and made. We’re getting closer to where we want to be,” said Black.

Import Allen Durham powered the Bolts offensively with 36 points, 20 rebounds, and 3 assists. Alapag tied his highest output in a Meralco uniform with 18 points, 6 assists, and 5 rebounds. Hugnatan had 17 points and 8 rebounds.

Brownlee notched a conference-high 42 points with 13 rebounds to pace the Gin Kings. LA Tenorio all 3 of his attempts from beyond the arc but finished with 14 points plus 5 boards and 5 dimes.

Japeth Aguilar had 12 points and 9 rebounds while Scottie Thompson had 10 points, 10 rebounds, and 7 assists.

Meralco was aggressive in Game 3 and went to the line for 27 attempts and made 21, while Ginebra settled for just 7-of-14 from the foul line.

The Gin Kings bricked 18 3-point shots and made only 4 as opposed to the Bolts’ 12 made triples.

Game 4 of this series is on Friday, October 14.