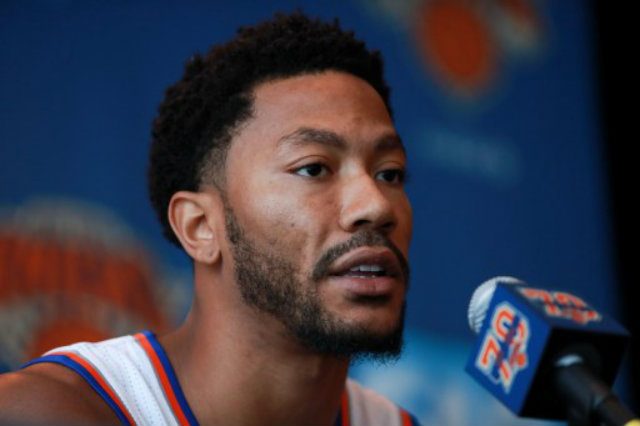 Facebook Twitter Copy URL
Copied
A judge denies the Knicks guard's request for a mistrial in a $21.5 million lawsuit stemming from a 2013 incident

Lawyers for the New York Knicks guard sought the mistrial on grounds that they were not given access to several text messages they call essential to their case until the player was on the witness stand in the civil trial.

Federal Judge Michael Fitzgerald described the situation as “careless” but ruled that the delay in providing the texts to the defense should not result in a mistrial.

So the case continues.

Rose, Randall Hampton and Ryan Allen are being sued for at least $21.5 million by a 30-year-old woman who says they gang-raped her at her apartment in Los Angeles in 2013.

The three men deny the allegations, claiming the sexual contact that took place was consensual.

Lawyers for the woman claim the text messages show the plaintiff was unaware the men were coming to her apartment and that she had no intention of having sex with them.

Rose’s legal team say the texts prove the opposite – that the woman was a willing participant.

Rose, 28, testified on Tuesday that the plaintiff was “awake and alert” when he and his friends took turns having sex with her.

The woman testified last week that she was so intoxicated that she has only “flashes” of memory of the alleged rape.

Rose said that after a party at his house, the woman sent him a text message that read: “You need to come see me right now.”

Rose said the woman greeted Rose and his two friends and told them they could have sex with her “one at a time.”

Lawyers for the plaintiff say their client was drugged by the men earlier in the evening and that she was unaware they had entered her apartment. – Rappler.com