Oct 26, 2016 1:53 PM PHT
Agence France-Presse
Facebook Twitter Copy URL
Copied
The Kevin Durant-Warriors era gets off to a tough start with Kawhi Leonard and the Spurs stealing the show 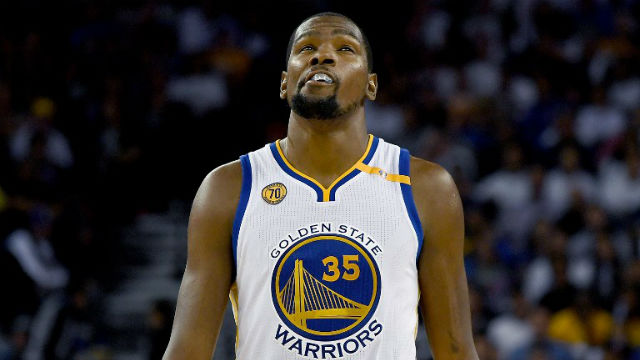 A packed house at Oakland’s Oracle Arena had arrived hoping to see new signee Kevin Durant take his place amongst the most potent offense in the NBA.

But while Durant enjoyed a solid enough scoring league debut, with 27 points, the Warriors were comprehensively outplayed by a Spurs side who looked sharper in almost every department.

Stephen Curry and Klay Thompson both failed to hit the heights of their best form of last year, when they helped the Warriors to a historic NBA record of 73 wins against only 9 losses.

Thompson was particularly off-color, making only one 3-pointer from 6 attempts with Curry sinking only 3 of 10 in his haul of 26 points.

Instead it was San Antonio who seized control from the contest early on, grabbing a 31-20 lead by the end of the first quarter which they were never to relinquish.

By half-time the Spurs had taken a commanding 64-46 lead and were always able to keep the Warriors at arm’s length as they sought to rally thereafter.

While Leonard was outstanding, demonstrating his readiness to step into the leadership role vacated by the retired Tim Duncan, the Spurs also benefited from a dazzling performance from LaMarcus Aldridge, who chipped in with 26 points, 14 rebounds and 3 assists.

Jonathon Simmons also stood out with 20 points from his 28 minutes on the court while veteran Manu Ginobili also made double figures with 10 points. – Rappler.com