UP pulls out of UAAP Cheerdance Competition

Oct 26, 2016 2:50 PM PHT
Naveen Ganglani
Facebook Twitter Copy URL
Copied
After finishing in third place last year, UP filed a protest but it was shot down by the UAAP 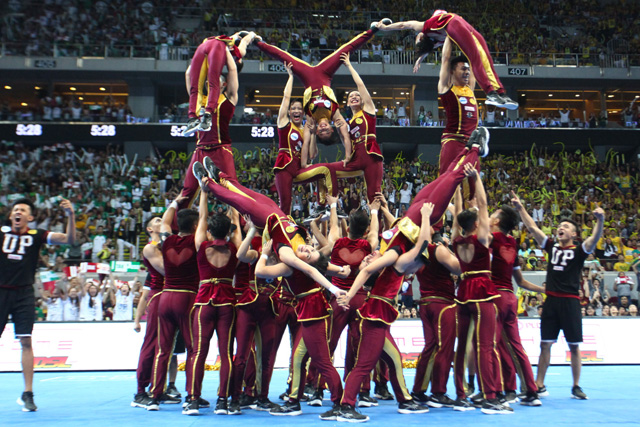 MANILA, Philippines – The University of the Philippines (UP) Varsity Pep Squad released a statement through Facebook on Wednesday, October 26, announcing that they will not participate in this year’s UAAP Cheerdance Competition, which is set for November 19 at Smart Araneta Coliseum.

“Finally, we can share the news to those who have been wondering that, regretfully, we will not be part of this season’s UAAP Cheerdance Competition,” the statement read.

“From our first request for an informal meeting, to the letter of protest advised by the organizers themselves, we have exhausted all our efforts to reach a resolution.

“We have repeatedly sought out the delegated individuals to no avail. And after many weeks, months, and now a year of waiting, our issues and questions remain unresolved. Reared in the institution we represent, we abide with our principles of honor and integrity, and stay true to our word of foregoing with the competition, should the same organizers be hired to handle the event again.”

The UP Pep Squad did say that they are still training in preparation for this year’s Asian Cheerleading and Dancesport Competition, where they will represent the Philippines.

Arguably the most successful cheerleading program in UAAP history, the UP Pep Squad has failed to finish in first place in each of the last 3 CDCs. National University has held the top spot in each of the past 3 years.

After finishing in third place last year, the UP Pep Squad filed a protest which included a statement from head coach Lalaine Juarez-Pereña stating, “We firmly believe that the overall results did not genuinely reflect adherence to the competition guidelines and criteria.”

The protest was however shot down by the UAAP, which retained the results of the competition where NU finished first and UST coming in second.

The UP Pep Squad, which has 20 medals, was also not included in the order of performances for this year’s CDC released on Wednesday.