Oct 27, 2016 12:32 AM PHT
Mars G. Alison
Facebook Twitter Copy URL
Copied
In just his second year as head coach, and after getting the job by accident, Gary Cortes finds his place atop CESAFI basketball 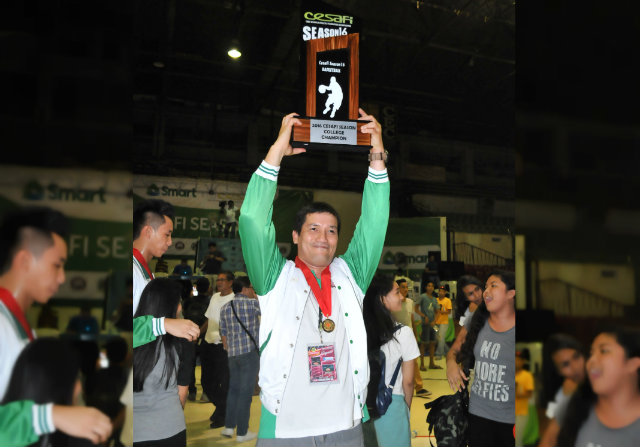 CEBU CITY, Philippines – University of the Visayas (UV) Green Lancers head coach Gary Cortes could still be considered a neophyte in the coaching arena as the 2016 CESAFI season is still his second year on the job.

However, he seemed to be doing an excellent job already after he guided UV to its 11th CESAFI championship, finishing off defending champions University of San Carlos (USC) Warriors in Game 4 on Saturday, October 22.

Not only that, Cortes also steered the UV Green Lancers to a first runner-up finish in his rookie season last year. Cortes inherited a vaunted UV Green Lancers squad that had already accumulated 10 CESAFI titles, 9 of which they bagged consecutively from 2001 to 2009.

As if stepping into the shoes of a UV Green Lancers head coach was not daunting enough, Cortes also had to go up against veteran coaches, such as Raul “Yayoy” Alcoseba of the Southwestern University Phinma Cobras and Agripino “Jun” Noel of the University of San Jose Recoletos Jaguars.

Cortes considers Alcoseba and Noel as legendary coaches in the Cebu basketball community but he takes going up against them as a challenge. In fact, the newbie coach has played under Noel during his collegiate years.

Cortes did not have much coaching experience to draw from when he took over the reins of the Green Lancers replacing former MBA and PBA player Felix “Donbel” Belano, who helmed UV to its 10th title in 2013.

In 2000, he was tapped as an assistant coach right after graduating college from UV but only for 4 months as he was signed up to play for the Laguna Lakers in the Metropolitan Basketball Association (MBA).

Prior to that, Cortes also helmed Central Visayas, manned by only 8 UV players including himself, to a silver finish against NCR in the 1996 Palarong Pambansa held in Cotabato City. He had to take over the role of a head coach aside from being team captain as their coach wasn’t able to join them due to a conflict of schedule.

Cortes started his basketball collegiate career at the Surigao Trade School where he played for a year before he was brought by coach Elvis Atinado to UNO-R in Bacolod City. There he played for Noel for only a year as the veteran coach came back to Cebu to coach Sunpride, a commercial team.

In his second year in Bacolod, Cortes experienced playing for a national intercollegiate tournament as their team coached by John Emperio went up against UM of Manila.

Though he never got the coveted MVP plum, Cortes never missed out getting named into the Mythical 5.

(I only get to be named into the Mythical 5 coz I have more technical fouls than scores. I’m not more on scoring, my role in the team is rebound and defense. I will do everything to limit or stop the best player of our opponents, which led to several games getting into a rumble and I already regretted it a lot.)

Cortes also got into the MBA in 2000 without aiming for it. He was signed up by the Laguna Lakers at the time he was serving as assistant coach to the UV collegiate team, which played an exhibition game in Ozamis City. It was there that he got scouted while doing shooting drills with the team.

The newbie coach, however, decided to end his MBA career after a year because he admitted that he was no longer at the peak of his basketball career and he also had many Filipino-American teammates, whom the team prefers to use.

He then came back to Cebu and focused on their international freight forwarding business and had nothing to do with basketball for 12 years.

In 2013, a friend invited him to watch Game 2 of the UV vs SWU title series and he happened to sit beside Didi Gullas, who was the team manager at the time he was still a Green Lancer. When UV lost Games 1 and 2, Gullas decided to call the coaching staff to a meeting wherein he was invited and was asked to give suggestions.

Cortes said that he suggested to make adjustments on offense and defense. When UV won Game 3, another meeting was called and Cortes was made to join the meeting again.

Eventually UV won its 10th title in the CESAFI but Cortes made himself scarce right after Game 5. He did not join in the celebration because he went on a business trip a day after the championships.

Later, Cortes got offered the assistant coach position but he refused due to time constraints. However, he became puzzled that every time UV lost, he was informed of it.

When Belano and the UV Green Lancers parted ways in 2014, Cortes was offered the head coach position, which he refused out of delicadeza to Belano. However, in a talk with Belano, the latter encouraged him to accept the post.

After Belano left in 2014, Gullas then asked Cortes to coach the UV Green Lancers in a tournament in Lapu-Lapu. Cortes agreed to accept the chore for the meantime while UV was still searching for Belano’s replacement. Fortunately, Cortes helmed the team to the title and to a third place finish in the Philippine Collegiate Champions League a week later.

A few days later, Cortes was invited to another meeting but to his surprise, the whole team including the current team manager, Rep. Gerald Anthony “SamSam” Gullas Jr., was there and he was introduced as the new head coach of the UV Green Lancers.

Too late to refuse, Cortes made a condition that he would not be able to do it full time as he has a business to take care of.

(I am hesitant knowing that today’s basketball is much more advance than during my time. The drills for players now are more advanced. And, coaches undergo lots of coaches’ seminars and I have never done that. So all I tell the players now is that basketball then and now are the same, dribble, pass, shoot and play defense.)

Making it more difficult for Cortes is that unlike other teams in the CESAFI, UV players are scouted from far flung places where they learn to play basketball in their barrios. Most of their players did not come from big universities where they are already taught of the fine points of the game.

(Our players are raw talent coming from different barrios but they learn. As compared to other teams who have players coming from Manila, already ready made. With us, we still have to teach and develop them, despite that they are able to shoot the ball.)

Cortes attributes the team’s current success to the coaching staff’s coordination in focusing on the players’ discipline first.

(We have been working first on the players’ discipline which is probably why we have this achievement plus exchange of ideas with coach Van Parmis and coach Jojo Maglasang.)

Cortes, however, is mindful that a head coach’s job is demanding especially of his time. He is also anticipating that when a team wins, players are lauded and gets the attention while if the team loses, it is the coach’s fault.

With the 2016 CESAFI title and 2015 runner-up honors under his belt in just his first two years as head coach, Cortes is still hesitant about making it a permanent career.

Although for future plans, Cortes said that, “It’s all Cebu coaches’ dream to become a champion in the national level, same with us UV coaches.” – Rappler.com