Pacquiao shows no signs of slowing ahead of Vargas fight 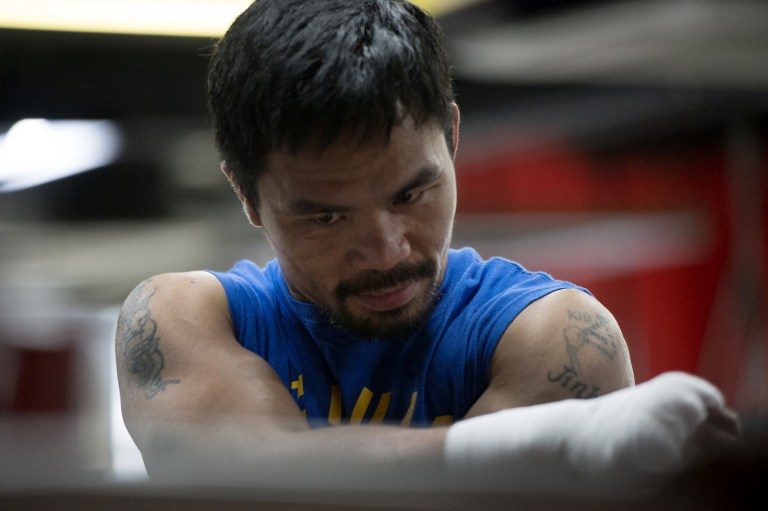 Facebook Twitter Copy URL
Copied
'It is important to win this fight convincingly to prove that I am still there.,' says Pacquiao

LOS ANGELES, USA – Manny Pacquiao says that despite a punishing schedule which includes juggling two high-profile jobs in the build up to his return to boxing he has still managed to maintain his fire for the sport.

Now that the Philippine Senate is on a break, the boxing legend says he is finally able to start training in earnest to face World Boxing Organization welterweight champion Jessie Vargas in Las Vegas.

Three months after ending his brief ring “retirement,” Pacquiao is in the final weeks of preparations for the fight which will be held November 5 at the Thomas & Mack Center.

“It can be very difficult if you are not disciplined. But I feel good,” the recently-elected Senate member Pacquiao said Wednesday at the Wild Card Gym in Hollywood.

“Every day I was able to run in the morning and then train after the Senate session. The gym is very close to the Senate.

“It is important to win this fight convincingly to prove that I am still there.”

Pacquiao’s long-time trainer Freddie Roach said the 37-year-old’s continued success is a result of the hard work he puts in in the gym.

“His work ethic is still the greatest I have ever seen,” Roach said. “I am amazed that after 15 years of working together he still has that passion.

“He’s beating the mitts and beating his sparring partners. He still has the speed and power. Manny will punch this guy out.”

Pacquiao looked impressive in April when he dominated Timothy Bradley in their third fight.

If he gets past Vargas, as many think he will, Pacquiao could be looking at a fight against unbeaten Terence Crawford in 2017. – Rappler.com

MORE STORIES ON PACQUIAO VS VARGAS

Pacquiao missed the boxing ring the moment he retired

Nonito Donaire stands as his own man on first Pacquiao card

Pacquiao continues to fight because that’s what Pacquiao does