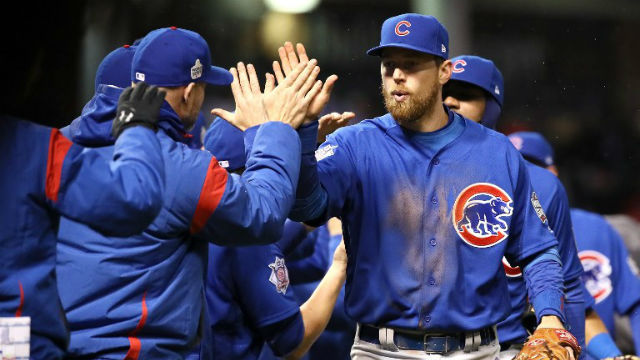 CLEVELAND, USA – Get ready Wrigley Field. The Chicago Cubs are coming home with a chance to win their first World Series crown since 1908 in front of their devoted but long-suffering supporters.

The Cubs are trying to end the longest title drought in American sports history and could do it in Chicago starting Friday by sweeping the next 3 games at iconic 102-year-old Wrigley Field.

“Having a World Series to root for, it’s going to be incredibly special,” Cubs manager Joe Maddon said.

“Wrigley, it’s always crazy good, but I would have to imagine a little bit more than that, especially coming back at 1-1. I think the folks will be jacked up about the win.”

Arrieta, last year’s Cy Young Award winner as the National League’s best pitcher, tossed a no-hitter in 2015 and another this year and was off to a hot start over 5 innings despite 3 walks.

“I knew I hadn’t given up a hit all the way to the sixth,” Arietta said. “That’s really not the focus in a game like this. You want to pile up outs as often as you can. I wanted to stay aggressive. That was a mindset throughout, whether I gave up a hit or not.”

The 30-year-old right-hander stumbled to surrender a run on two hits in the sixth but threw 55 strikes among his 98 pitches over 5 2/3 innings.

“Overall he had great stuff,” Maddon said. “His command, a little bit scattered at times, but he kept battling through.”

Two first-inning walks with two outs prompted a conference on the mound that helped Arrieta focus.

“I had my foot on the gas a little too much at the start, trying to do more than I needed,” Arrieta said. “Then I really got back to just executing good pitches at the bottom of the strike zone.”

“We only gave up 5 runs. We were probably pretty fortunate,” Indians manager Terry Francona said. “For us to win, we generally need to play a clean game and we didn’t do that.”

Cold and damp conditions added to the tension and discomfort.

“It was so cold I tried to go to the bathroom in the fourth inning and I couldn’t,” Francona said. “That tells you enough.”

Kris Bryant singled and scored the Cubs’ first World Series run in 71 years on a double to rightfield by Anthony Rizzo.

In the third, Rizzo walked with two outs, took second on a Ben Zobrist single and scored on Kyle Schwarber’s single up the middle to give the Cubs a 2-0 edge.

Bauer lasted only 3 2/3 innings and his relievers fared no better.

Rizzo walked again in the fourth and scored when Zobrist tripled to the right corner. Schwarber singled up the middle to send home Zobrist and put Chicago ahead 4-0.

Schwarber took second on a wild pitch and third on a Kipris error and scored when Indians relief pitcher Bryan Shaw walked Addison Russell with the bases loaded for a 5-0 Cubs lead.

The Indians, whose championship dry spell since 1948 marks baseball’s second-longest drought, finally answered in the sixth.

Kipris doubled, took third on Francisco Lindor’s ground out to second base and scored when Arrieta hurled a wild pitch that got past Cubs catcher Wilson Contreras.

Cleveland had two base runners in the seventh and one in the eighth but Cubs reliever Mike Montgomery struck out 4 and Cuban closer Aroldis Chapman entered in the eighth to finish off the victory. – Rappler.com