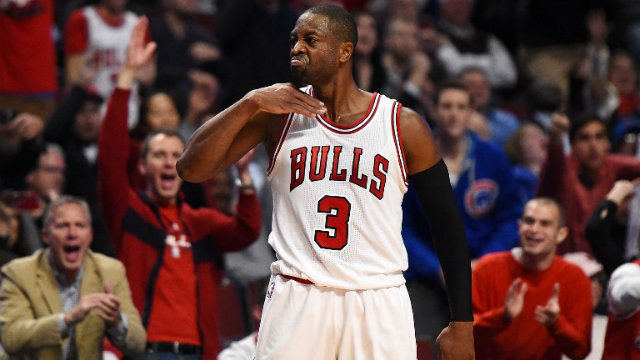 CHICAGO, USA – Dwyane Wade tallied 22 points in his Chicago homecoming as the Bulls showed off their retooled roster with a 105-99 win over the Boston Celtics on Thursday, October 27 (Friday Manila time) at the United Center.

After trading point guard Derrick Rose to the New York Knicks, Chicago overhauled last season’s roster with the addition of Wade and Rajon Rondo, who signed with the Bulls in the offseason.

Wade, who finished with 22 points, hit 4-of-6 from the 3-point line in his first game with the Bulls. Wade had just 7 3s during all of the last NBA season for the Miami Heat.

Wade, who grew up in Chicago, sealed the victory Thursday with his final 3-pointer of the night. He nailed a long-range shot over guard Avery Bradley with 26 seconds left in the fourth quarter to put Chicago up 104-99.

Wade has never been known as a three-point shooter but he’s been working on getting better at it.

“For a guy who has been in the league that long it says a lot that he is willing to work hard and add a new element to his game,” said Bulls coach Fred Hoiberg.

“For some guys who can’t shoot, I think we did pretty well tonight,” said Butler.

Forward Taj Gibson finished with 18 points and 10 rebounds for Chicago as he earned a starting role to begin the season.

Nikola Mirotic had 15 points off the bench for the Bulls, who dominated the glass 55-36.

The Celtics played their second game in as many days after defeating the Brooklyn Nets 122-117 on Wednesday at home.

Chicago led the entire first half. That included a 57-49 lead at halftime, after getting a combined 28 points, 12 rebounds, 11 assists from Wade, Butler and Rondo.

The Celtics are coming off two straight playoff appearances. This season they added 4-time all-star Horford, who inked a 4-year deal worth $113 million.

Wade said he likes the way the Celtics are playing and that teams are going to have trouble stopping them this season.

“You have to be at your best if you are going to beat them,” he said. – Rappler.com