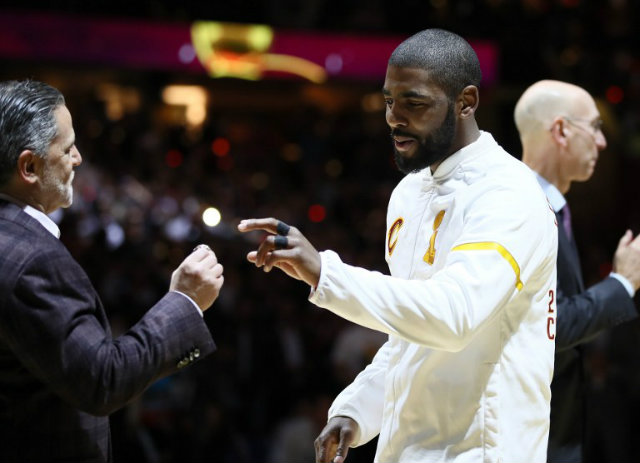 LOS ANGELES, USA – Kyrie Irving is picking up right where he left off last season, displaying the same late-game composure that allows him to sink clutch baskets for the Cleveland Cavaliers.

With the game tied 91-91, Irving showed off his steely nerve by draining a 3-pointer with 44 seconds left to lift the Cavaliers to a 94-91 win over the Toronto Raptors on Friday night, October 28 (Saturday in Manila).

Irving’s dagger came from the top of the key and it was none other than LeBron James who fed him the ball.

“I tried to make a move for myself, get into the seams, but when I seen the defense collapse, I know where my guy was going to be,” James said.

Irving’s basket brought back memories of another game winner, in Game 7 of the 2016 NBA finals when he nailed a step-back 3 from the right side over Golden State star Stephen Curry.

James and Irving combined for 47 points as the Cavaliers squeezed past the Raptors in a rematch of last season’s Eastern Conference finals.

Irving scored a team-high 26 points while James finished with 21 points, 8 rebounds and 7 assists as the Cavaliers took to the road for the first time this season, winning in front of 19,800 at the Air Canada Centre arena.

The Cavaliers opened the season on an emotional night Tuesday with a 117-88 hammering of the New York Knicks. Before the game they received their 2016 NBA championship rings and raised the banner at Quicken Loans Arena.

Kevin Love chipped in with 18 points and 10 rebounds for the Cavs who defeated the Raptors in 6 games to reach the 2016 NBA finals.

With the game tied 91-91, the 24-year-old Irving dropped one of his 5 3-pointers helping the Cavaliers remain undefeated (2-0) to start the season.

DeMar DeRozan led Toronto with a game-high 32 points and 7 rebounds while Kyle Lowry added 17 points and 4 assists as the Raptors (1-1) lost for the first time this season.

In Detroit, Tobias Harris haunted his former team by scoring 18 points as the Detroit Pistons built a 23-point halftime lead and then cruised to a 108-92 win over the Orlando Magic.

The former Magic forward added 4 rebounds, two assists, two steals and a block for the Pistons.

Beno Udrih and Aron Baynes added 13 points apiece off the bench for Detroit.

Forward Aaron Gordon had 17 points and 7 rebounds and point guard Elfrid Payton chipped in 15 points and 6 assists for the Magic.

In New York, Brook Lopez scored 25 points and the Brooklyn Nets held the Indiana Pacers without a basket for the first 5 minutes of the fourth quarter and rallied for a 103-94 win.

Jeremy Lin contributed 21 points, 9 assists and 9 rebounds for the Nets, who held the Pacers to 15 points in the fourth quarter.  – Rappler.com