Oct 31, 2016 4:46 PM PHT
Agence France-Presse
Facebook Twitter Copy URL
Copied
Drawn to boxing thanks to Muhammad Ali, a 19-year-old Pakistani girl and her mother strive amid a deeply conservative society in hopes of one day winning gold in Olympic boxing 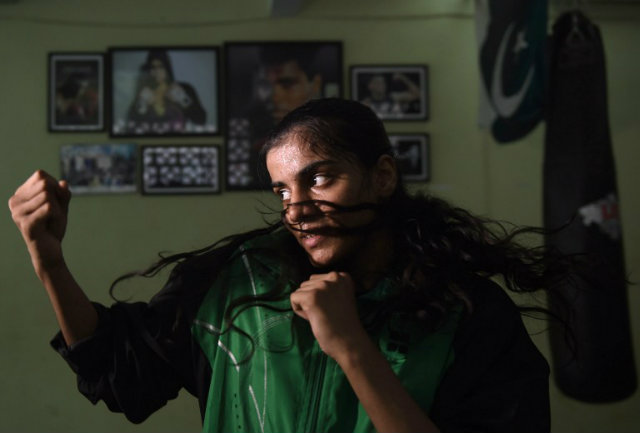 KARACHI, Pakistan – Slim, powerful, and with an unwavering gaze, 19-year-old Razia Banu jabs at the face of her opponent – her own mother, a widow inspired to join her daughter in smashing taboos in Pakistan’s sultry port city Karachi.

Mother and daughter are both dressed in loose athletic gear, with scarfs wrapped around their heads instead of helmets, as they punch one another in an exhibition bout at the Pak Shaheen Boxing Club in Lyari, Karachi’s most restive – and sporty – neighborhood.

Banu was drawn into the ring last year, after watching the grand funeral of legendary boxer Muhammad Ali.

He was “my favorite personality,” she told AFP after “losing” to her mother, pointing with a smile to a small framed poster hung on a pillar that read Ali’s famous “Float like a butterfly, sting like a bee.”

She went to her mother to seek permission to join the club, started just last year, the first for women in all of Pakistan.

Haleema Abdul Aziz worried about her daughter’s request. There were financial considerations – her husband had passed away 5 years back, and she was struggling to afford even school fees for her children.

And then there was Pakistani society. Deeply conservative and Muslim, it has seen women fight for their rights for decades – and, sometimes, in a country where acid attacks and honor killings are still commonplace, their lives.

The violence weighs on Aziz.

“I believe that all the males become beasts when a woman goes out alone from her home,” the 35-year-old single mother says.

“But I did not disappoint her (Banu) because I wanted her to be successful in her life.”

Her husband was a good man who encouraged his daughter to take part in sports, she says. Yet Banu echoes her mother’s wariness when it comes to men and violence.

“Males think that they are strong so they could beat females and force them to be confined to the home,” she says.

“But I think that when you have strength you should provide safety to people instead of beating them.”

Her passion – and penchant for practicing at home – soon inspired her mother also, who followed her daughter in joining the club. 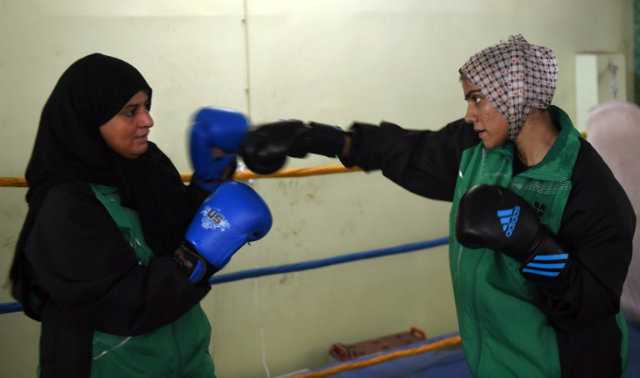 Banu leaves home early every morning for her job as a receptionist in a school, before going on to college, where she studies commerce.

She reaches the boxing club in the evenings. There she drills: punching bags and balloons, skipping rope, then practice bouts with some of the other 20 young girls who make up the club.

The club is sparse, its facilities comprising the ring, 3 punching bags, and a boxing balloon in a corner. Money, says the club’s founder and coach Yunus Qanbarani, is tight: few of the boxers can afford to even pay their fees.

Then there is the social backlash. “At one point, some people plotted to attack the club to force me to close it down. But I am determined to carry on,” he says.

Qanbarani, who has been a boxing coach for 40 years, has sent his own two daughters and other women from his family to be trained at the club.

“I want our daughters to go to the international level and hoist the Pakistani flag in foreign lands,” he vows.

“We don’t have a dearth of talent in Pakistan,” says Sher Mohammad, who took a bronze medal at the 1993 Asian Games. “We improvise and use alternatives to make up for our lack of resources.”

The support inspires Aziz and Banu to new heights.

Aziz plans to become good enough to coach girls herself one day.

“I wish to box in the Olympics – and not just participate, but to win the gold,” she says, her eyes sparkling.

“I will keep striving for my goals. The hard work does not go waste.” – Ashraf Khan, Agence France-Presse/Rappler.com

Are you inspired by Banu’s story and would like to enhance your skills in a particular sport? Click here to take a look at our great deals that on sporting goods that can help you become better.