Nov 1, 2016 4:03 PM PHT
Agence France-Presse
Facebook Twitter Copy URL
Copied
It's Chicago's first 3-0 start since the 1996-97 season, and it comes despite fears that off-season changes might see the Bulls take some time to click 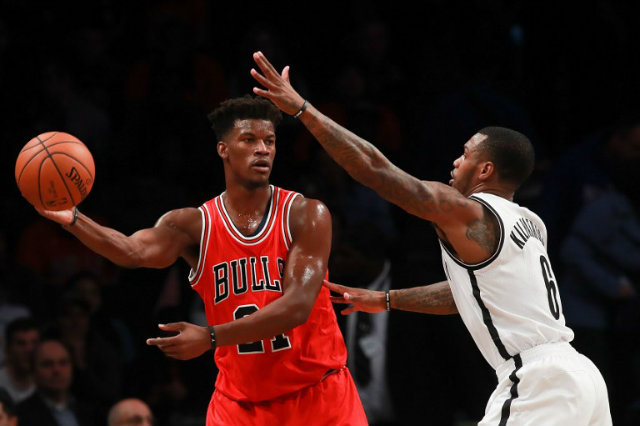 LOS ANGELES, USA – The Chicago Bulls ran roughshod over the Brooklyn Nets on Monday, October 31 (Tuesday in Manila), producing an explosive offensive effort in a 118-88 victory that has them off to a 3-0 start in the NBA.

It’s Chicago’s first 3-0 start since the 1996-97 season, and it comes despite fears that off-season changes including the departure of Derrick Rose and arrival of Dwyane Wade might see the Bulls take some time to click.

The Bulls connected on 50.6% of their shots from the field, including 40.7 from 3-point range.

“Our intensity out of the gate has been really good,” said coach Fred Hoiberg, whose Bulls scored 38 points in the opening quarter and never trailed after the opening 3 minutes.

They led by double digits most of the night.

Wade scored 12 points in his first road game with the Bulls. That included a slick crossover move on the Nets’ Bojan Bogdanovic in the fourth quarter that drew some appreciative gasps from the crowd.

“I always get great support when I come here,” Wade said. “The fans are amazing. It feels like home. I don’t know if they cheer like that for me at home when I got the ball. So it was great to be out there.”

Bogdanovic led the Nets with 15 points while Jeremy Lin added 14 and Brook Lopez had 13 in 22 minutes after resting Saturday.

“I just think we didn’t have that normal pop or that explosiveness or the normal hunger that we normally have on the defensive end, actually just in general,” Lin said.

The Los Angeles Clippers and Atlanta Hawks also improved to 3-0 with wins on Monday.

Chris Paul scored 18 of his 24 points in the second half as the Clippers routed the winless Phoenix Suns 116-98 in Los Angeles.

Paul also had 8 assists and 5 rebounds. Blake Griffin added 21 points, 11 rebounds and 5 assists for the Clippers.

Clippers center DeAndre Jordan didn’t seem to show any ill effects from a sprained right thumb suffered in Sunday’s win over the Utah Jazz, finishing with 19 point and 11 boards.

“The thumb? It would be hurting if we lost, but we won so it feels a lot better,” he said.

The Suns were without guard Devin Booker, who sat out with a sore right big toe. Booker apparently aggravated the injury in Sunday’s 106-100 loss to Golden State.

Brandon Knight started in Booker’s place and led the Suns with 18 points.

The Clippers broke the game open in the third quarter. Two free throws by Knight allowed the Suns to close within 56-55 with 7:12 left in the period.

But the Clippers put together a 22-9 scoring run for a 78-63 lead and the Suns couldn’t respond.

“I think they stayed engaged defensively and they just kept trusting and eventually (shots) started to fall. Once the basket opened up, the way we were defending we were in great shape.”

The Hawks improved to 3-0 with a 106-95 victory over the Sacramento Kings in Atlanta.

Paul Millsap and Dwight Howard both posted double-doubles for the Hawks, who led by double digits but needed a fourth-quarter surge to win after letting the Kings back into it.

Millsap finished with 13 points and 14 rebounds and Howard had 18 points and 11 rebounds. Four other Atlanta players scored in double figures for the win in a bruising contest in which the teams combined for 54 fouls. – Rappler.com